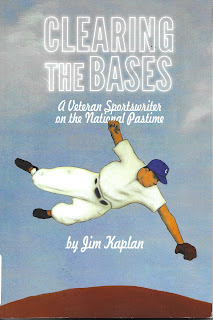 By Jim Kaplan
The next time someone claims that the sports section is the Toy Department of a newspaper or magazine, tell them about Jim Kaplan. Better yet, show that person some of his work. "Clearing the Bases," published in 2016, will work nicely.
Kaplan obviously grew up in a smart family, as he was the son of a state Supreme Court justice in Massachusetts. Jim has a history degree from Yale and a Masters in journalism from Northwestern. From there it was on to the sports department of the Minneapolis Star, and then he landed at Sports Illustrated. Kaplan mostly wrote about baseball for the next 16 years. "Pine-Tarred and Feathers" is a book that was something of a diary on life at SI; as I recall, it was nice to know that those guys had their own problems while working despite the appearances of landing a dream job at the time.
Kaplan has done other books along the way, and not just about baseball. He's written about everything from travel to bridge (the card game, that is), although baseball remains a passion. "Clearing the Bases" might not be called a valedictory collection, but it seems like a collection of stories that either never got fully written or deserves a second look.
If you want to call this an anthology, and you might, it's an unusual one. There are a little more than 200 pages in the book, and about 87 of them are devoted to one subject. The man in question is Ron Taylor, best known in baseball circles as a member of the 1964 Cardinals and 1969 Mets - both World Champions. Kaplan obviously is quite fond of Taylor, who breaks most stereotypes about athletes. The pitcher got his engineering degree, and then after baseball decided he'd like to become a doctor. Taylor did exactly that, making it look much easier than getting Frank Robinson and Mickey Mantle in World Series appearances (which he did).
There's an essay about baseball and American culture, looks at Paul Molitor and Tim McCarver, college baseball on Martha's Vinyard, the joys and trials of playing right field, and a few opinions on the state of the game of baseball circa 2016. Give Kaplan full credit for predicting that nets should be placed well down the foul lines to protect spectators; he was a couple of years ahead of his time on that one.
You wouldn't call Kaplan a flashy writer. The words don't jump off the page at the reader. Instead, each word contributes to the story as it should, and the paragraph moves right along. Call him a subtle craftsman if you'd like.
Any rating I'd give here would be suspect. I've had a couple of encounters with Jim over the years. I interviewed him for 30 minutes on my talk show for the "Pine-Tarred" book. Then I had dinner with him when he came to Buffalo to promote his book, "The Greatest Game Ever Pitch." He's also a Facebook friend. The most interesting sportswriters are the ones who can see outside the lines instead of just between them. It might take a little searching to find "Clearing the Bases," but it's worth the effort.
Learn more about this book.
Be notified of new posts on this site via Twitter @WDX2BB.
Posted by Budd Bailey at 3:50 PM