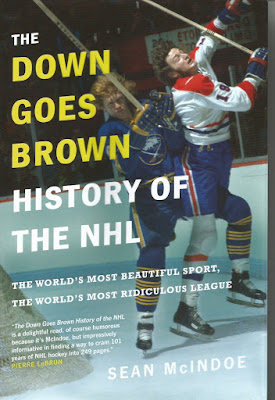 Anyone who has been around the National Hockey League certainly appreciates its rich history. The game dates back to the 19th century, and it has grown well past its roots from something to do in the winter in Canada to an international attraction with millions of fans.

The world's biggest league, of course, is the National Hockey League. It attracts most of the world's best players, and goes back more than 100 years.The NHL's grown has been spectacular in the second half or so of that span, jumping from six teams in the Northeast and Midwest to a 31-team circuit that includes teams from Florida to California.

But the youngsters out there should know that the NHL hardly has been the well-oiled machine that it now resembles over the course of history. It was a men's club of sorts for quite a while, and not a particularly well-run one. The joke back in the 1980s was that "the NHL is a great game, in spite of the people who run it."

Those little quirks always have made the NHL an interesting league to follow. Sean McIndoe is all over that, and he covers NHL's past in a breezy and fun way in his book, "The Down Goes Brown History of the NHL."

McIndoe has done a lot of hockey writing over the years. He has a website called, you guessed it, "Down Goes Brown." That appears to have something new just about every day in season, although some of the material is blocked as it links to full stories behind a paywall at The Athletic. Who am I to deny someone the right to earn some money via writing?

Sometimes bloggers try a little too hard to be edgy, and I had that worry when I first dove into the book. Luckily for all concerned, McIndoe's primary concern in his book is to compile a readable account of the NHL's story - as opposed to looking for laughs first and facts later. He is under control, and thus scores big points.


From that point, we take off into the world of NHL history. We should have known that it was going to a bumpy ride from the start. The original owners were part of another league, but they got fed up at an owner of a Toronto team and essentially started another league without him. The league grew out of a small all-Canadian loop but had some major growing pains that are rather typical. Teams frequently moved or folded, as it took time to find a business model that worked. Remember that these guys were pioneers in winter sports leagues, since a pro basketball league wouldn't really become a major entity until after World War II.

In 1942, the NHL settled into a six-team league - the Original Six, if you will, and stayed that way for a quarter-century. The Canadiens, Red Wings and Maple Leafs won most of the titles in that era, while the little sisters called the Rangers, Black Hawks (later Blackhawks), and Bruins usually were on the outside. The owners were never really interested in strong leadership, and found someone who wasn't interested in it. The teams sold a lot of tickets, but didn't have many ways to increase revenues. And if you weren't one of the best 120 players in the world, you were playing for peanuts in the minors - a high bar to hurdle.

Expansion finally arrived in 1967, and we were off on the second 50 years of the league. McIndoe starts to crank it up here, telling stories that you might find hard to believe now. Did you hear the one about the city that received an expansion team without applying for one? Or the time the league president was nowhere to be found when a playoff game had a confrontation between coach and official? How about when one team tried to buy another team's best player for a million dollars?

The format here is pretty simple. There are 25 chapters, and 24 of them either cover some chronological history or deal with a certain subject. No. 25 is about the future. Samples include the international invasion, the Gretzky trade, fighting and labor dispute. The first 24 also have a "strange but true" sidebar. Buffalo fans know all about one of them, the drafting of Taro Tsujimoto. No, make that two of them - the odd story about using a roulette-like wheel to determine the first draft pick in 1970. The Sabres won that spin, eventually, and Gil Perreault was the prize. But there are stories you don't know about too, like the time the Stanley Cup was missing at the Finals - or at least was late in arriving.

That's not surprising, because there are plenty of facts that I didn't even know, and I've read a lot of stories about hockey history.The footnotes are particularly good for such matters. It's all organized quite well, too.

This is hardly a definitive book on the NHL's past at 249 pages, but that's fine. There are big reference books for that sort of knowledge. This is designed to be a quick, fun read, and it succeeds in its goal quite nicely. Big fans of hockey certainly will love "The Down Goes Brown History of the NHL," and they might learn a few things along the way. The reviews on Amazon.com are overwhelmingly good. As for me, it's going to stay on my bookcase for quite a while.

Be notified of new posts on this site via Twitter @WDX2BB.
Posted by Budd Bailey at 5:02 PM

Labels: Review: The Down Goes Brown History of the NHL (2018)