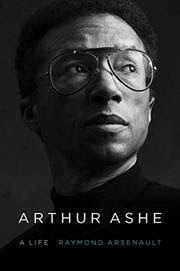 It's been a little more than 25 years since Arthur Ashe died. That seems like something of a blink to those who remember his life and interests, which are still relevant today. Ashe's name appears on everything from the USTA stadium in New York to an annual award for courage from ESPN.

On the other hand, maybe it really did take that long to put together a full biography of this now-legendary sports hero. Raymond Arsenault hasn't spent the past quarter-century researching this book, but you might have been fooled into thinking that way after picking up a copy of a publication that checks in at almost 800 pages (including notes and credits).

Ashe might have been the most multi-dimensional personality to pop up in the sports section of the newspaper in many years. He was sports star, humanitarian, activist, philanthropist, author, broadcaster, lecturer, and so forth. It's all here in "Arthur Ashe - A Life."

Arsenault starts the story in Richmond, Virginia, where Ashe spent most of his childhood. Ashe was born in 1943, and his timing was close to being perfect in terms of his status as a pioneer in the sport of tennis. Richmond was the capital of the Confederacy, of course, and it was still a difficult place for African-Americans to live through the 1950s. That's especially true for those who had an interest in tennis, one of the "country club" sports in which most of the best players came from affluent backgrounds.

Ashe showed enough promise in the game to spend his senior year of high school in St. Louis, where racial issues were less of an issue (relatively speaking). He then earned a scholarship to UCLA - where Jackie Robinson, anothersports  pioneer, attended college. The Sixties portion of the book features some great information on that period for tennis. Walls are were starting to come down for a black like Ashe, as he climbed the ladder in the rankings of American tennis players. Then, just as he was ready to finish a stint in the Army and had to figure out how to make a living at tennis if possible, the sport eventually opened up to allow professionals a chance to capitalize on their skills. As the author outlines, it was a complicated time, as amateurism didn't go quietly into the night. There were some bumps on that road, and if Ashe had been a little younger he might not have made it.

But he did. Ashe usually ranked in the top 10 of the world in his prime, won three major championships, and was a constant presence on the United States Davis Cup team. It was a career capped by a surprising win at Wimbledon over Jimmy Connors in 1975, which still is considered one of the great tennis upsets in history. A good-sized heart attack soon ended his career with a racquet. However, most people figured Ashe was the one athlete who figured to have a second act in his life, and he plunged into the list of interests and activities mentioned above.

Some of them led to controversy and interesting discussions. For example, Ashe played a part in the battle to open South Africa up from its policy of apartheid. He played in some tournaments then and paid other visits to that country. Was it better to do that, or isolate the country and its evil policy? It's still difficult to tell.

We certainly get a sense here of what life was like for Ashe after "retirement." It's almost like Arsenault found Ashe's date book, and reviewed his schedule. Hint - it was really busy, with flights all over the world. It didn't let up until the very end; Ashe contracted AIDS from a blood transfusion and died in 1993.

It's easy to fall in love with the subject of such biographies; I usually associate the practice with books on Abraham Lincoln. Arsenault certainly carries his admiration of Ashe throughout the pages of the book. It's tough to blame him for that.

Two other minor objections come up here. Reviewers have noticed that sections on the book on Ashe's tennis abilities fall a little short of the rest of the book, and they are right. The matches are described in great detail, but a few more stories from contemporaries about what made Ashe as good as he was would have been nice. Along those lines, the book also suffers a little bit from the effects of the computer age. It's easy to write a long book in this day and age, but this probably could have lost about 25 to 50 pages with a last, probably painful edit.

Even so, "Arthur Ashe" offers a really good portrait of a self-described "citizen of the world" who still could be a role model for many. Ashe did write three memoirs of his life, and they are worth exploring for those interested, but Arsenault's treatment probably will be the one that holds up as the best exploration of the multi-faceted champion.

Be notified of new posts on this site via Twitter @WDX2BB.
Posted by Budd Bailey at 6:34 PM