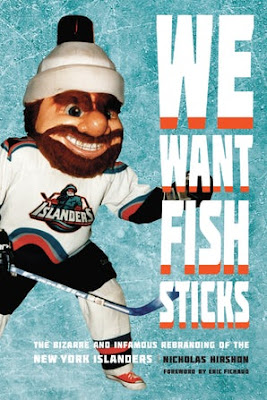 What are the chances of two books having the words "Fish Sticks" in the title - books that have nothing to do with the frozen food industry?

Not bad, as you'd know if you are a fan of the New York Islanders of the National Hockey League. Book one came out in 2003 and was simply called "Fish Sticks." Now in 2018 we have "We Want Fish Sticks," by Nicholas Hershon.

Why all the talk about fish sticks? It was a short-hand way of referring to the Islanders' attempt at rebranding the franchise in the mid-1990s. The team dumped its old logo - one which seemed to be fine when the team won four straight Stanley Cups in the early 1980s - and came up with a new one. Logo II featured a fisherman, and it resembled the one used by Gorton's Fish Sticks.

The new design was a failure, and is still something of a laughing stock for those who follow such things. What's more, it was something of an instant failure, as Rangers fans loved to chant "We want fish sticks" to mock the Islanders during games.

What went wrong? Well, almost everything, as Hershon discovered when he researched this book. First of all, it was a time when NHL teams had discovered the power of merchandising, thanks in part to teams like the Mighty Ducks of Anaheim. The Islanders thought they needed something new to help increase enthusiasm for the team, particularly after a disappointing season. But they did little research on the subject and couldn't be bothered testing any of the designs before focus groups or hearing the reactions of fans - you know, the people who actually might buy the merchandise. The Islanders' front office might have discovered that there is an emotional attachment to a sports team's logo, especially one that's been around a while.

But Hershon suggests that a bigger problem might have been the team itself. It was hoping that the logo would catch a wave of improved fortune for the team. Instead, the Islanders continued their losing ways. The team shuffled executives and coaches with regularity, and trades and draft picks simply didn't work out. The players interviewed for the book all agreed that while they weren't crazy about the new look in many cases, a logo doesn't score any goals. The franchise also had ownership problems, especially toward the end of this era, as it turned out new owner John Spano was a complete fraud and wound up spending plenty of time in prison in the years ahead.

In fact, the team's ups and downs probably receive closer scrutiny in the book than the logo's fate. Games, trades and other changes during the span of the new logo's life are well covered, but it's a little difficult for someone who doesn't bleed the Islanders' colors to get too involved in that part of the story. It was more of a turbulent era than interesting. Besides, such superfans might even know the details already.

Even when the two stories are combined, this is quite a short book. It checks in at around 200 pages, including a long interview with the late designer of the logo (he died a few years ago) is included in its entirety. Hershon certainly did plenty of work in researching this, but many of the quotes are short and the effect is that the writing comes off as choppy in spots. The tale is also told in a serious way, and having a little fun with the subject would have been helpful.

The story of the Islanders' ill-fated logo probably is worth telling, but a book might not be the best format for it. A long magazine piece for some publication might have been a good fit. One of ESPN's documentaries in the "30 for 30" series might have worked too.

That leaves "We Want Fish Sticks" without much of a natural audience. Still, those looking for what went wrong with this marketing campaign will find their questions answered and then some. You can pick those people out - they are the ones wearing the fisherman's logo on uniforms at Islander games.

Be notified of new posts on this site via Twitter @WDX2BB.
Posted by Budd Bailey at 1:29 PM