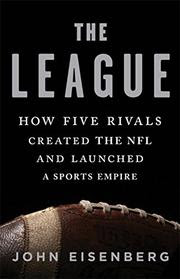 It is difficult to imagine the National Football League as something of a curiosity in the sports world. We've gotten used to full stadiums, maxed-out television broadcasts, and overwhelming media coverage.

As you may have guessed, it wasn't always that way.

The NFL didn't draw a straight line to success. There were all sorts of bumps along the way - times when it looked as if the concept of pro football wasn't going to quite make it.

That's what John Eisenberg covers in his worthwhile book, "The League."

It's probably an oversimplification to say that "five rivals created the NFL and launched a sports empire." But - it's not a huge exaggeration. Certainly, the story of the NFL's history can not be told without giving a large amount of credit to such men as George Halas, George Preston Marshall, Art Rooney, Bert Bell and Tim Mara.

Halas was there at the creation, at the now-famous car dealership in Canton, Ohio, where the league was first formed. He was a player, coach and owner of the Bears. Marshall brought showmanship to the league with the Redskins. It's also fair to say that he added more than a touch of racism to the story. Rooney was always a beloved figure with the Steelers, although  it took him decades to field a consistent winner in Pittsburgh. Bell, a child of privilege, unexpected became an owner and eventually the commissioner of the league. A case could be made that Bell is one of the most underrated figures in pro football history, and Eisenberg makes it. The author points out that Bell brought a lot of organizational skills and common sense to the league, qualities that were not always in large supply.

In hindsight, it seems like the concept of professional football should have been a slam dunk, to mix a metaphor for a moment. In the 1920s, college football was packing people in big stadiums throughout the country. When those players graduated, they should have brought a following along with them to the pro game. But that didn't really happen too often in that era, with the odd exception like Red Grange.  The pro game also suffered from instability, frequently caused by weak ownership and a lack of organization.  Check the record book, and you'll see how teams played one game in the NFL and then disappeared from view.

The five men profiled here persisted. Sometimes they were willing to do what was best for the league instead of what was best for their team, even if that attitude didn't extend to the playing field. They had some major obstacles thrown in their way. The 1930s featured the depression, of course, and money was hard to find. That led into World War II, where many of the players crossed the oceans to fight for their country. The end of the war marked the birth of the All-American Football Conference, and dueling leagues chasing limited dollars means losses for just about everyone. Along the way, a color line was created by the NFL, kicking African Americans out in the early 1930s and keeping them out until after WW2.

Eventually, the big city teams - New York in particular - became major players in their areas in the sports scene. By the Fifties, pro football was waiting for a match to ignite - and it found one with the 1958 NFL championship game. That was the overtime classic between the Giants and Colts, and there was no turning back from there.

Eisenberg does a good job of telling the story here, with plenty of details that aren't common knowledge even for football fans. If you've ever wondered about the evolution of some rules or the adoption of the college draft, the subjects are covered here. And the personalities of the five men certainly come alive.

The thought comes to mind while reading this that it might be a little difficult to attract a young audience with this book. It's been 60 years since that 1958 game, and there's plenty of dust on the tales revealed here that came before that. So it's not for every taste.

Those who do read "The League," though, will find it rewarding. Eisenberg, who has done several other books on sports history, is good at making the details come alive. After finishing it, readers will certainly realize that the NFL's current success was far from inevitable.

Be notified of new posts on this site via Twitter @WDX2BB.
Posted by Budd Bailey at 9:07 AM