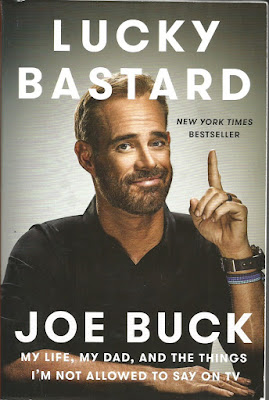 It turns out the Joe Buck is something of a smart aleck.

I realize that's an outdated phrase, dating back to the 19th century. It's short for smart Alexander. I realize that most people probably would use the phrase "smart ass," including Joe Buck himself. But, since I'm really sick of that slightly naughty word and so many try to use it in as many ways as possible, I'll stick to my old-fashioned ways.

How about wise guy? And who knew he was like that, anyway?

Joe Buck is one of the nation's best sports broadcasters. He seems to be on Fox constantly, whether it's baseball, football or golf. As a top play-by-play man, he concentrates on the action and only reveals his personality in bits.

What's more, he's a more interesting person - funny and smart - than he reveals on the air. That might be the major discovery from his book, "Lucky Bastard."

Speaking of slightly naughty words, the title deserves a little explanation right from the start. Most people who follow sports realize that Joe Buck is the son of Jack Buck, the legendary broadcaster from St. Louis. Buck was a very public figure in his home town as the veteran voice of the Cardinals, and he also did some national work on radio and television. "Beloved" doesn't do justice to the relationship between town and voice.

It seems Jack Buck had a relationship with a woman who wasn't his wife. That led to the conception of Joe, a divorce of the Bucks, and a second marriage for Jack. Therefore, Joe really can call himself a lucky bastard and be more literal than most.

Joe ended up following Jack into sportscasting, and that would prove to be a tough act to follow. I get the impression that Joe could have followed Jack into a spot as the Cardinals' long-time broadcaster, and no one would have complained too much ... eventually. (There are always those who will yell out, "You're not as good as your dad!") Instead, Joe went the national route when the opportunity came along, and it's tough to argue with a choice with a career filled with World Series and Super Bowl broadcasts.

Still, there's always a little angst involved when a child takes a similar path to a parent. Perhaps that's why Joe Buck became friends with Kate Hudson, the actress who is the daughter of Goldie Hawn. Kate dole him, "Americans love a good success story. They're just not sure what to do with the success story that comes out of a success story." That sounds like the start of a good book on its own.

As you'd expect, Buck has plenty of stories about his adventures, good and bad. He's not afraid to take a poke at himself or at a few others, but it's generally a good natured story. Joe jokes a few times about his battles against a receding hairline, which has included some hair plug operations. Ouch. But he can serious too, talking about his divorce. That's not an easy combination to pull off, but he does it well.

"Lucky Bastard" goes by pretty quickly; you'll finish it in a jiffy. It's a bit of a surprise that he wrote it at this stage of his career (he has lots of tread left on the tires), but it reached the best seller lists so Buck's timing remains sharp. Most people will come to the conclusion after reading this that Buck can handle the written word as well as the spoken version, and that he'd be a fun person to be around. Missions accomplished.

Be notified of new posts on this site via Twitter @WDX2BB.
Posted by Budd Bailey at 11:18 AM