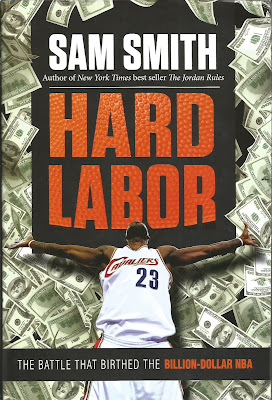 For those of you under 40, the National Basketball Association always has seemed like a place of unmatched riches. The stars are everywhere, the games on television constantly, the money involved is enormous. The league's biggest problem seems to be at times is figuring how all of this cash should be split up. That's not to say that distribution of funds isn't an issue, but we all should have such problems.

It wasn't always like this, as Sam Smith points out in his book, "Hard Labor."

Smith is best known as the newspaper reporter who became the most closely associated with Michael Jordan's era with the Chicago Bulls. His book, "The Jordan Rules," will be associated with that era forever.

Here, though, Smith takes a step back. The focal point of the discussion of when the NBA turned the corner toward permanent prosperity was not because of the arrival of a certain player or two, although that didn't hurt. A court case became the fulcrum.

In 1976, the NBA players and owners settled the legal action known as the Oscar Robertson case, since the all-time great had his name on top of the lawsuit as the head of the players' association at the time. It set up some new rules that led to free agency in the NBA and other benefits. It took some time to fall into place, but Smith's key point - and it's a good one - is that it's nice to look back and nod at your predecessors for their contributions.

Smith does that here by finding many of the people involved in that struggle. What's more, you can tell he had a ton of fun doing so. For the record, the 14 plaintiffs in the case were Robertson, Bill Bradley, Joe Caldwell, Archie Clark, Mel Counts, John Havlicek, Don Kojis, Jon McGlocklin, McCoy McLemore, Tom Meschery, Jeff Mullins, Wes Unseld, Chet Walker and Dick Van Arsdale. McLemore is the only one to have passed away. Smith spoke to several other people for the story, including legal representatives from both sides.

All of them are filled with stories about those days that, in hindsight, are worthy of a good head shake or two. Even in the 1960s, players were often more money to work for company teams like Phillips 66 than to be in the NBA. (Some of the guys who did that, by the way, are multi-millionaires now.) Players often had to take part-time jobs in the offseason to make ends meet, and owners were barely getting by in some cases. Although Smith does touch on the 1950s and early 1960s, he spends plenty of time on the competition with the American Basketball Association. That really was the Wild, Wild West of pro hoops, a league that broke all the rules - including coming up with generally fair contracts - and was filled with characters.

And remember, racial attitudes in basketball still hadn't come around by the 1960s. The Celtics were the first team to start five blacks, and that came in the mid-1960s. The Hawks might have won some titles in the 1960s had they chose to keep a talented roster of African American stars together. Instead, when they moved to Atlanta, they signed Pete Maravich to a huge deal that helped grease the skids for others to depart.

Still, there's plenty of fun along the way. Mullins tells about how he received something of a full-court press from the entire state of Kentucky when he was thinking about a college choice. He went to Duke, which didn't exactly go over well. The shooting guard had a nice career and played a key role in the Robertson settlement as a moderating influence. And you'll love reading about the Van Arsdale identical twins, whose careers in basketball were almost - you guessed it - identical.

The biggest flaw here is that the story does jump around a bit. This isn't a straight line to the settlement and its effects. That may not go over well with some readers. The manuscript also has trouble with the usage of "its" a few times. That's a personal pet peeve; someone once said that the use of that word is the single biggest way to determine if someone knows the language or not.

But Smith accomplishes his goal of paying tribute to those who helped make the success of today's players and league possible. "Hard Labor" will leave you entertained and informed about that history lesson - no easy task.

Be notified of new posts on this site via Twitter @WDX2BB.
Posted by Budd Bailey at 10:40 AM