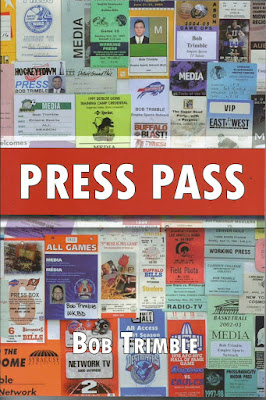 This might be that rare book in which the author's stories about his work experiences that are printed might take a back seat to a more personal look at his life.

Bob Trimble was one of those kids who wanted to go into sports broadcasting when he grew up, and succeeded in that goal. He was a boy in the Pittsburgh area, but most of his career was spent in Michigan with a good-sized stop in Buffalo. Bob was pretty good at is, as his longevity indicates.

But apparently soon after he lost his job in Buffalo when the Empire Sports Network folded, Bob suffered from a case of Bell's Palsy. He never completely recovered from the ailment. Then throw in a heart attack and some depression issues, and it's clear that life hasn't been too fair to one of the nice guys of the business. (Disclaimer: I knew him during his days in Buffalo a bit.)

A couple of years ago, Bob sat down and wrote a book about his sportscasting experiences. It's called "Press Pass." It's surprising that no one in Buffalo heard about it before now, but he recently came to town to sell it.

The format is quite simple. After introducing himself as a 1979 Ohio University graduate, Bob takes us through an alphabetical list of some of the sports personalities he encountered over the years. It's an interesting list, with some national figures involved. Muhammad Ali gets us off to a good start, followed by such people as Bjorn Born, Scotty Bowman, Terry Bradshaw, Howard Cosell, Dick Butkus, Wayne Gretzky, Steve Garvey, Gordie Howe, Earvin Johnson, Michael Jordan, Mario Lemieux, Joe Namath and Arnold Palmer.

Spoiler alert: They all tend to come off well here. Sometimes I wished that the ancedotes would center more on the interview subjects rather than how the conversations came to pass. But, they might be dated or deal with long-forgotten events that aren't too interesting in hindsight. ("Have you ever been to Grand Rapids before?) There are enough insights and interesting tales to move you along.

Trimble does one thing in this sort that is extremely rare - he devotes a chapter to "The Bad Guys." There are only four people listed - Dennis Conner, Scott Mitchell, Tom Seaver and Lou Whitaker. Well, that's not a bad batting average if those are the only bums out there. The chapter does make one appreciate the good guys more, even if they are in the vast majority. Trimble also pays tribute to some broadcasters and writers he's encountered along the way, and actors ranging from James Caan to Jamie Farr get a chapter too.

Self-published books usually have a few more errors in them than the ones done by the pros, and that's the case here. It happens. But Trimble's writing style is straight to the point and conversational, so it's easy reading.

It's good that Bob got "Press Pass" out of his system. He had the chance to tell stories about his career, and maybe it will give him a little closure. No rating here, because I'm a friend and made a trip down to a restaurant to get an autographed copy. But people who live in the same areas that Bob did ought to enjoy it well enough.

Be notified of new posts on this site via Twitter @WDX2BB.
Posted by Budd Bailey at 3:42 PM