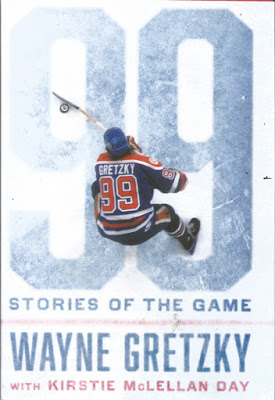 Hockey fans could have guessed who wrote this book just by the title.

After all, no one else in the game ever will be associated with the No. 99 in the future - unless you are one of the handful of people who remember a couple of other 99s who played in the NHL - such as Rick Dudley and Wilf Paiement.

Wayne Gretzky is the 99 in question here. He's written a book that's a combination of facts and memories called "99." It came out in the fall of 2016, which was the start of the - you guessed it - 99th season in NHL history.

But Gretzky might have had the biggest impact on the sport. When he arrived, the NHL was stumbling along. It was nearly bankrupt after a costly war with the World Hockey Association, and it still had an image problem left over from the days where fighting was a regular event at games - and thus was not taken seriously by large segments of the sports-minded public.

Gretzky arrived in the NHL in 1979 after a short stay in the WHA, and had a spectacular career. Not only could the league not ask for a better player, but it couldn't ask for a better spokesman and role model. Wayne was right out of central casting.

Gretzky wrote his autobiography about a quarter-century before this book, which fills something of a curious niche. It's something of a short, anecdotal history of the NHL mixed with his personal viewpoints. The book goes through a variety of topics early on, with Gretzky's views and stories mixed in a bit with historical background.

That's truly the odd part of the book. It's difficult to think of Gretzky going to the library to work on finding stories for the volume. The acknowledgments credit co-author Kirstie McLellan Day as well as a researcher, writer and fact-checker among others.  It works reasonably well although obviously a bit superficial, as there are better places to get a detailed hockey history lesson. But Gretzky's name still can attract attention, so if he can lure some readers in - great.

Once we get past Howie Morenz and Sprague Cleghorn (a name I can't type often enough) as well as the 1940s through 1960s, we land in what you could call the modern era of hockey. The second half of the book belongs to Gretzky and his tales about the great moments of hockey that he experienced. Some of that centers on the international competitions, including the 1972 series with the Soviets and some Canada Cups and Olympics. (The 1980 American win in Lake Placid is included.) Gretzky also has some stories about the Oilers' great dynasty in the 1980s.

Gretzky doesn't reveal too much about his life story after the point where he was traded to Los Angeles, which is a little disappointing. That includes the time when he coached in Phoenix. Gretzky also doesn't settle any scores here, taking the diplomatic approach. That includes, for example, his treatment of Bruce McNall, who went to jail for conspiracy and fraud and who drove the Kings to bankruptcy. Even so, Gretzky's anecdotes generally work well in this format, as the nearly 400 pages go by relatively quickly.

"99" isn't a ground-breaking book by any means, but it is a pleasant one and accomplishes its goal. It would be a good read for young people who want to learn a little of hockey's history, or for Gretzky's many fans who want some inside stuff on his fabulous career.

Be notified of new posts on this site via Twitter @WDX2BB.
Posted by Budd Bailey at 8:18 PM