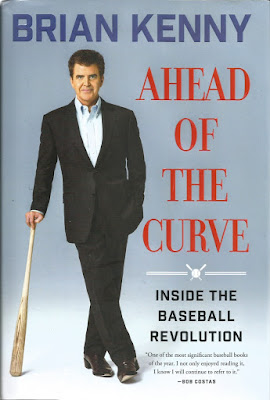 If you are a baseball fan, you may have noticed that a statistical revolution has been taking place over the last couple of decades. We've come up with all sorts of new ways of more accurately measuring performance on the diamond, but it all can be a little confusing - maybe a lot confusing in some cases - to those who haven't been paying attention.

Television host Brian Kenny takes a look at the revolution in his book, "Ahead of the Curve," taking some of those advances principles and applying them to the present and the past. That's not a bad idea at all, although what he writes about may strike you as more pleasing as how he writes about it.

Some of the numbers that are kept in baseball have been with us for well over a century - batting average, pitching wins, fielding percentage, and so on. We have come to believe that a .300 hitter in baseball is a good hitter, and that a 20-game winner on the mound is a great pitcher. But there are obviously problems with those numbers. Batting average doesn't account for walks and power, which makes it less effective than on-base percentage and slugging percentage (now combined into one number by many called OPS) in making those judgments. Pitching wins have an obvious bias toward good teams (the more games you win ...) and offensive support. Sometimes a pitcher gets eight runs scored for him every time he takes the mound, and suddenly he has a 14-2 record. Earned-run average is a better tool to judge pitchers, although that has its drawbacks too.

It's rather remarkable how much information is now available to baseball teams, and they are busy coming up with more of it. Every major league franchise has an office full of bright people who are looking for an edge. Sometimes they find one. If you saw or read "Moneyball," you realize how on-base percentage was overlooked for sometime, giving the Oakland Athletics an edge. The Pirates jumped on board the concepts of defensive shifts and pitch framing early, which helped their rise from sub-mediocrity.

Kenny goes through a variety of topics here along those lines. He thinks the save isn't really a good barometer of relief pitching, and that teams are on their way to changing their use of pitchers so that more hurlers appear regularly in a game for a shorter length of time. If you watched the Indians last year work their way to the World Series, you realize that he may be right. Kenny throws in a look at MVP selections over time and who should have been taken in a given year. That might not be fair in spots, since sports writers didn't have today's tools, but it's a fun exercise. That includes the 1941 American League debate, which pitted Joe DiMaggio and his 56-game winning streak against Ted Williams and his .406 average. Kenny eventually goes with DiMaggio, who did win it at the time, but wavers along the way.

This is all fine, and if you are looking for a course in such matters, you'll be well-served in that sense. But I found myself coming back to the question, did I like reading this? That's a tougher one.

I remember Kenny from his days at ESPN. I don't see him on the air now because he's on the MLB Network, which isn't on my cable package. Kenny comes across in the book as really sure of himself, as if anyone who disagrees with him isn't worth his time. Some of the reviews on amazon.com indicate that he's like that on the air too.

I always like to say that if I'm going to read a book about something, I want to enjoy the author's company along the way. I found myself getting tired of baseball people and reporters being insulted here. I would have preferred to have been given the facts, which are on Kenny's side, and gone on from there. I know, though, that television these days prefers loud to reasonable.

"Ahead of the Curve" accomplishes its goal, and I can understand why many readers have liked it. Maybe they'll now understand I'm a little less enthusiastic about it.

Be notified of new posts on this site via Twitter @WDX2BB.
Posted by Budd Bailey at 1:25 PM