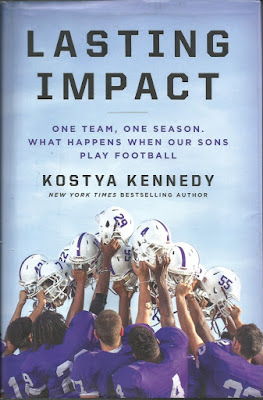 Kostya Kennedy absolutely nails the key issue about concussions in football in his book, "Lasting Impact."

At the end, he writes, "The notion of football as a sport overwhelmingly played by the have-notes and consumed by the haves is not an easy notion to bear. Something will be deeply lost."

We all have read the stories about retired pro football players who are suffering from brain injuries later in life. Gale Sayers, the Hall of Fame running back, just added his name to the list recently. Are we headed to a time when the only people who will take the risk of playing football are those with the least to lose? In other words, is football going down a path that was pioneered by boxing? Because in terms of general interest, that has turned into a road to something approaching irrelevance.

We don't know yet. But Kennedy headed to high school in 2014 to see what the football landscape looked like at that level. He found a sport with plenty of positives going for it, but with the concussion lurking nearby like a thunderstorm in the distance.

He did it by spending time with the New Rochelle football team, located north of New York City. New Rochelle is a good-sized suburb with a mix of demographics roaming its school hallways.  The Huguenauts have had good success over the years, usually fielding winning teams thanks to a veteran coach who worries about X's and O's some of the time and his players' personal problems at others.

There are profiles of the coaches, administrators and players, naturally. Lou DiRienzo, the coach of the team, comes off pretty well. High school head coaches receive a little more exposure to real-world problems than those higher up the food chain in college and the pros; those guiding such teams are a little more isolated from the players on an everyday basis.

Every so often, Kennedy has to shift his focus to the real world - for example, the death of two high school football player relatively close to New Rochelle. And that doesn't include concussions that seem to be something close to a weekly occurrence in football these days.

Just to add an unexpected twist to the story, who enters the scene but Ray Rice - just after he was released by his NFL team after a video was released showing him striking his future wife in an elevator. Rice played for New Rochelle, and returned to his high school during the season in the middle of the controversy surrounding the situation and his fate in it.

New Rochelle at least came through for Kennedy with a good season. But the author wisely doesn't get bogged down in too many details of a year that is in the past and won't be that interesting to most readers - even though it's easy to root for some of the people involved. Kennedy is more interested in focusing on how high school football can supply support, discipline, and bonding for kids. It does that in many cases, but it also leaves kids on the sidelines with headaches - and who knows what's ahead for them?

Kennedy wrote a pair of terrific books on Joe DiMaggio's streak and Pete Rose. This book isn't quite so obviously compelling because of the less-famous subject matter, but the author's smarts still come through nicely here.

By the end of "Lasting Impact," Kennedy still isn't sure whether he'd let a son of his play high school football. He writes that he had no agenda going in, and still didn't have one going out. Kennedy can see arguments on both sides.The romantic side of high school football is still appealing, but the risks of playing become more real all the time. It's tough to know what the right answer is in every case.

Be notified of new posts on this site via Twitter @WDX2BB.
Posted by Budd Bailey at 12:38 AM