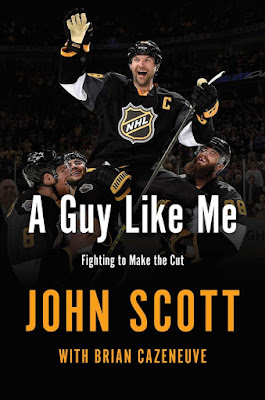 By John Scott with Brian Cazeneuve

One of the big lessons of 2016 is that free elections can have interesting and unexpected consequences.

I was thinking about the voting for the NHL All-Star Game, of course. Did you have anything else in mind when you read that?

The center of attention in this case is John Scott, a veteran enforcer who found himself in the spotlight last year. There's little doubt it's the reason he wrote this autobiography, "A Guy Like Me."

Scott was playing for the Arizona Coyotes a little more than a year ago when an unofficial campaign got underway, probably viral in nature, to get Scott into the All-Star Game. His vote total kept going up and up until he was in position to win a spot in the starting lineup.

The situation was a little awkward, and the NHL didn't help matters with its clumsy response. League officials tried to get Scott to reject the invitation if he actually won, which he didn't do. Then an NHL official tried to tell Scott it was bad for the league for him to play in the game, which made him more determined than ever to play. The capper was when Scott was traded to Montreal and immediately sent to the minors under shadowy circumstances. Could a minor leaguer even play in an NHL All-Star Game?

Scott did go to the game (there was no rule against it), had a couple of goals, and was named the Most Valuable Player. Everyone who tried to get serious about a cute little exhibition game in which no one hits or plays defense came off badly, while Scott was embraced. It's almost a movie plot, and Scott says author Mitch Albom is working on it.

The veteran's version of those events certainly is the highlight of the book, issued quickly enough to still attract the interest of hockey fans. As for the rest of the story, it's relatively standard stuff - although Scott is far from a typical hockey player in some ways.

The native of Canada grew up mostly across the border from Buffalo. He grew into his size of 6-foot-8 eventually, making him rather fearsome on the ice. Scott landed a spot on the roster at Michigan Tech University, where he - this is the most unusual part - studied engineering. So much for that jock stereotype in this case.

Scott quickly figured out that he needed to be a potential fighter to play at hockey's highest level, and he made the decision to do so. He wasn't a legend as these things go, but he did his job no matter where he went. Enforcers sometimes bounce from team to team where they are most needed, and Scott was no exception with seven NHL teams on his resume. Scott retired after the 2015-16 season; the All-Star Game was a tough act to follow.

Scott comes off here as a pretty smart person, as the engineering degree would indicate, and rather articulate too. He's easy to like, and no wonder many rooted for him in his career. The biggest catch in the book comes when Scott isn't writing about the All-Star Game. There's a great deal of material on how he learned to fight and his battles along the way. The problem with the story is that there's isn't much else to it. Scott wasn't really a part of too many memorable games or teams. He only participated in four playoff games, all with Chicago. Scott has some stories about teammates such as Patrick Kane and Joe Thornton, but a little more humor would have been nice.

Fans of hockey fights are famous for their enthusiasm and passion for that aspect of hockey - take it from a guy who co-wrote a book with an enforcer. They should enjoy "A Guy Like Me." The rest of the potential audience probably won't be so engrossed.

Be notified of new posts on this site via Twitter @WDX2BB.
Posted by Budd Bailey at 7:22 PM