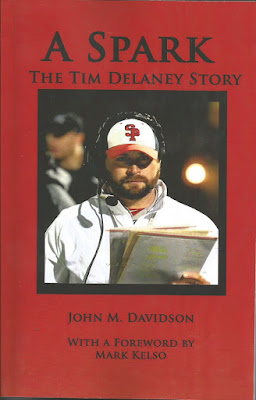 This isn't a full-fledged review of a book. It's more of a heads-up that a book is out there. As I understand it, people sometimes buy gifts at this time of the year.

In 2015, the South Park High School football team had the best season in its history. No team from the City of Buffalo had ever won a Section VI title (meaning the region around Buffalo) in history, let alone gone on from there. South Park did that and much more. The Sparks won a state championship.

The coach of that team was Tim Delaney, who took a few bows for breaking through that barrier - although, frankly, he probably would have rather been watching film of old games. Delaney said that he was reminded of the championship just about every single day of the offseason.

So here's another reminder. John M. Davidson has written a biography of Delaney called "A Spark." That's a fair title, since Delaney went to South Park High School and now teaches and coaches there. But he also took a match to the football program and ignited it so that it could reach new heights.

After a handful of chapters concerning Delaney's youth, the book starts following the many twists and turns of his career. He's bounced around a bit over the years, jumping from youth programs to high schools. Football coaches at all levels tend to lead nomadic lives, but it's surprising just how much that applies to high schools too. But when a head coach switches jobs for whatever reason, he often reaches back into his past for friends made along the way.

Eventually, Delaney worked his way up to being head coach at South Park. That's not a plum job as these things go. There's usually not enough money to support the program fully, and the number of kids with family or personal issues is large. Coaches like Delaney often find themselves buying their players a fast meal, because otherwise those players would go hungry. As you might guess, no one goes into high school coaching to make money. This isn't an aspect of the job that receives any of the publicity, so it's probably the best part of the story.

Slowly, Delaney built up the program so that good athletes passed through and thrived in the system. It all paid off in 2015, when the Sparks (so named because the school is located on South Park Ave., or as the street sign outside it reads, 'S. Park') ran through the opposition in a series of dramatic wins. The highlight might have been a semifinal win over Maine-Endwell, which had won the previous 62 games. ESPN's documentary on Maine-Endwell was a little spoiled by the surprise win by the Sparks, but that wasn't South Park's problem.

A book like this has different standards than one that is produced for a mass audience. It's designed to be a nice keepsake of a memorable time. Author Davidson makes a couple of decisions that are at least open for question. There are no details of the games or mentions of players' names along the way, keeping the focus completely on Delaney. The games were so exciting, though, that it really would have been nice for many to relive them here. Davidson also uses very few quotes in the story, even though he talked to many people about the season. That puts a little distance between reader and story that didn't need to be there.

No matter. "A Spark" does its job well enough. I would think anyone with connections to the coach or team will enjoy it, and in that sense the book is a nice little tribute. We should always celebrate such efforts.

Be notified of new posts on this site via Twitter @WDX2BB.
Posted by Budd Bailey at 10:25 AM