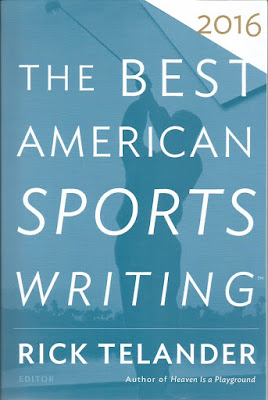 It's year 26 for the annual edition of "The Best American Sports Writing" series. Not only have I read all of them, but I've reviewed several of them on this blog.

Sometimes it's difficult to come up with a fresh approach to the review, which can happen in a series of anthologies. But in this case, the angle to take here became apparent pretty quickly.

Translation - the editor really does matter in these books.

Rick Telander gets his turn at putting the book's contents together. He's well-qualified for the job, serving as a columnist for the Chicago Sun-Times. Telander established a good reputation nationally for his work at Sports Illustrated, and his book "Heaven is a Playground" is considered one of the best books of its kind.

Telander sets out the ground rules for his selections in his introduction. He points out that he is interested in entertaining writing, first and foremost. Then he adds, "It's hard for any account of a big sports event or a much-watched game to make it into these pages. Those uber-stories ... have been told and retold in too many places to be original anymore." Telander then writes that he'd rather read about a Chinese student's bike-ride across America than about Tom Brady or Lance Armstrong.

So with that warning, we're off. The 27 selections in the book are all well done, so Telander has followed his own instructions well. I can't say I completely finished every entry - it's a hard sell to get me to read anything on UFC/MMA - but that's more my problem than the writer's in question.

Still, I found myself asking a question as I went through the book. Would this story normally appear in the sports section of a newspaper, or in a sports magazine? It's fair to say the answer on some of the articles would be "probably not" - at least more often as compared to other books in the series.

Which ones? Let's see, there's a tale of two people who a variety of personal problems who open up a bicycle shop. There's a victim of the Boston Marathon bombing, saying farewell to her leg. A teen who uses skateboarding to grow up a little. A hiker on the Appalachian Trail who actually is running, not walking, away from big trouble. That Chinese student who goes for a long bike ride. And perhaps a few others, depending on your definition of sports. Reaction gets personal - in the sense that it's tough for me to get too enthusiastic over any story about snooker, fishing or rugby - even though I've got enough faith in the book's premise to try then all.

There are plenty of more traditional sports stories that would fit in with the classic definition of best sports writing. A piece on Ted Williams' daughter wouldn't draw some in without the baseball connection, but it's really a fascinating look at father-daughter relationships. A story about a woman rower is told in a unique and honest way. There's an article on Africans who come to America in search of basketball scholarships, only to be lost in the shuffle. I particularly liked a story on the Cal Tech basketball team's struggles, and how author Jim Dent (I've read a couple of his sports books) succumbed to some demons.

The 2016 book isn't typical of the series, I guess, so I'll be interested to see how the reaction is. I remember Jane Leavy took a similar approach to her picks in 2011, and it didn't go over as well as some others. But those who open the first page with in an open mind will find some rewarding material that is to their liking.

Be notified of new posts on this site via Twitter @WDX2BB.
Posted by Budd Bailey at 9:47 AM