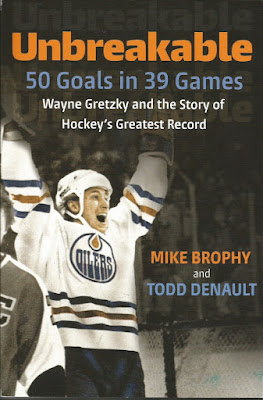 By Mike Brophy and Todd Denault

The subtitle of "Unbreakable" is "Wayne Gretzky and the Story of Hockey's Greatest Record."

Mike Brophy and Todd Denault can make a good case for that.

Scoring records are usually the glamour item of any sport's history book, and the changing length and conditions of seasons over the years makes it difficult to really compare apples and oranges in many cases.

But in hockey, one of the most memorable moments came when Maurice Richard scored 50 goals in 50 games. No one could duplicate it for almost 40 years, until Mike Bossy did it in 1981.

Then Gretzky came along, and did it in 39 in 1981-82. Preposterous. Even in an era where goals came easily for a variety of reasons, that was an amazing accomplishment.

Brophy and Denault have jumped into the idea that there's a book to be written about that chase by Gretzky for the record. They certainly did their best to make it work.The authors went through all sorts of sources to collect information, including finding facts in books, newspaper articles, magazines, etc. They interviewed some of the participants, including Gretzky himself. Therefore, the book certainly gets the story about how it happened across.

From there, the question becomes - is it interesting?

There's an inherent contradiction in telling the story, one by one, of those 50 games. Brophy and Denault wanted to show how it was done, but the games themselves - now more than 30 years old - don't really matter to the story that much. We're interested in Gretzky, but a lot of other information about the Oilers' season comes along for the ride. In other words, it's very difficult to make the games themselves worth reading about. That's a huge drawback.

The authors do try to provide some background of some of the Oilers players and front office members, as well as reviewing some of the opposing teams. It helps a bit, but a good percentage of the material may make the mind wander at some point.

It's tough to say if there was a better way to approach the idea of this book; I have my doubts. Gretzky's many fans certainly will find this a good source of information if they want to know how the legendary player set this particular record (one of many on his resume). Others, though, might not find "Unbreakable" worth their time.

Be notified about new posts on this site via Twitter @WDX2BB.
Posted by Budd Bailey at 11:06 PM