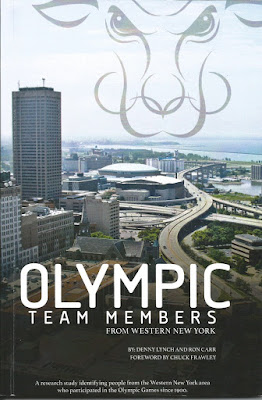 By Denny Lynch and Ron Carr

It's easy to admire people like Denny Lynch and Ron Carr. They just won't take no for an answer when it comes to sports information.

Lynch, a former football executive, and Carr, a teacher in Western New York, have a connection to the Greater Buffalo Sports Hall of Fame. That organization is saluting the great athletes of the area's past.

Lynch frequently asked people about local athletes who had made it to the Olympic Games. This did not come up just when Olympic competition was taking place, but at any point in the calendar. He quickly discovered that no such list of area athletes who had taken part in the Games existed.

And so, he and Carr started to make one. The first 50 were pretty easy, but then it got tough. But the two kept at it, and the resulting list of more than 200 names with Olympic connections has been turned into a short book called "Olympic Team Members from Western New York."

This covers every sport, winter or summer, that has been part of the Olympics over the years. It also required a great deal of work. You don't do something like this without a large degree of curiosity, as well as a love of the subject. Those qualities show up nicely in the book.

Every athlete from Western New York who made it to the Olympics receive a paragraph here, as well as a photograph when possible. Without counting, hockey is the leader in local connections because of the contributions of the Buffalo Sabres. Even so, there are a surprising amount of rowers who have taken part in the international competition over the years. And who knew there was a woman with local ties who had such a distinguished career in judo? I hope Grace Jividen comes up in future discussions about the Greater Buffalo Sports Hall of Fame.

Lynch and Carr don't overlook those on the edge of the Games either. Administrators get their due here, as do those who just missed qualifying. That makes it even more complete.

"Olympic Team Members from Western New York" is, at its heart, a reference book. You can read the biographies in a short period of time, and you should, but it's nice to have something like this available. I plan on placing it in my bookshelf, and it will stay there for a long time - only to come out when I need a fact or two about a specific area. It's nice to have such a valuable resource available.

Be notified of new posts on this site via Twitter @WDX2BB.
Posted by Budd Bailey at 11:17 PM