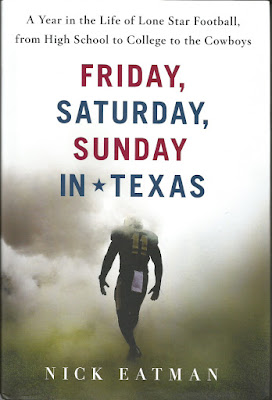 It's easy to wonder if Nick Eatman has watched much football this season.

Eatman realized that football is King in football, no matter if it is high school, college or pro. You've probably heard the stories about high schools in the Lone Star State spending tens of millions of dollars on stadiums. Some of you might be wondering if the English department could have used a little of that money, but that's a different discussion and a different book.

So, Eatman decided to write a book on a year in the life of teams at all three of those levels. The result is "Friday, Saturday, Sunday in Texas," which shows there's more in common among the teams that you'd think.

The high school team is from Plano, Texas, a northern suburb of Dallas. If you look at a Google map page about Plano, the picture used to represent the town is a large highway cloverleaf. I'm not sure if that's fair, but it is interesting. Plano has had some great teams over the years, but 2015 wasn't one of them. Yes, mediocre seasons are tough on everyone at the high school level.

The college team selected by Eatman is Baylor. The Bears had been on a role under Art Briles entering the 2015 season, moving up into the ranks of the nation's best teams. Baylor played an exciting brand of pass-happy ball, earning the nickname "Wide Receiver U." The team battled some injuries and other problems last year, but had a decent record.

Then there are the Dallas Cowboys. It's tough to judge if they are still America's team, but the Cowboys certainly are Texas' team. Dallas was coming off a playoff year, and hopes were high for the season ... until quarterback Tony Romo kept breaking collarbones. You lose your quarterback at any level, and your team is in trouble. In fact, that thread runs through the book.

To his credit, Eatman enjoyed good access to all three teams. The author worked with Briles on a book a while back, and that certainly helped get him in the door here. That may be why the Baylor material might be the most interesting portions of the book. The high school sections have the usual human interest stories that come with any scholastic sports - college choices, injuries, relationships, etc. The Cowboys have been a soap opera for large portions of their history, and some of that pops up here.

There are a couple of problems here that should be noted, the first of which is a small spoiler alert to those who don't follow football (and I can't imagine anyone this interested in this book would qualify(. You really have to be lucky in a book like this to pick the right season, and Eatman didn't have that luck. Plano High and the Cowboys head toward mediocrity pretty quickly. Injuries robbed Baylor of any chance at a special season, and - in a bizarre way - the story pretty much ends before it gets interesting. The Bears went through some off-the-field turmoil that led to a variety of departures by administrators, but it happened after bowl season and only pops up in the epilogue.

In addition, this is something of an "inside" view of three football teams. I would have liked to read a little more from the outside. In other words, let's hear about what makes Texas football special, which might come down to a more rabid fan base, tradition, etc.

Still, "Friday, Saturday, Sunday in Texas" goes down pretty smoothly. The season goes by a week at a time, making the pages turns quite easily. It's tough to say how well this will go over in Fargo, North Dakota, or Montpelier, Vermont. But this is a book that should keep Texas football fans reasonably entertained ... and there are a lot of them.

Be notified of new posts on this site via Twitter @WDX2BB.
Posted by Budd Bailey at 12:32 AM