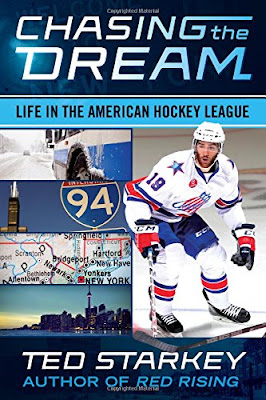 The idea of minor league sports has a oddly romantic side to it. Young players, out on their own for the first time, try to climb the ladder of their chosen sport in attempt for professional fame and fortune.

It should be mentioned that of the four big sports in America, only two - baseball and hockey - have well-established and durable minor leagues. Basketball has a developmental league, but that doesn't have much charm to it.

Several authors have tried their luck at portraying life in baseball's minor leagues. It's a long ladder there, as players have to go up four or five rungs to reach the majors. Meanwhile, hockey - with its one or two rungs - has more or less gone unexplored in book form. Ted Starkey tries to change that in his book, "Chasing the Dream."

If there's one point to be made here by the author, it's that minor league hockey sure isn't what it used to be.

The definitive image might come from the movie "Slap Shot," featuring long bus rides, financial problems and fight-filled games. The bus rides are still around in the American Hockey League (the equivalent of AAA baseball), although the planes are used sometimes in a league that now goes coast to coast. But there's some stability in money matters now. That's because several NHL teams own their own minor-league affiliates.

Some old-school owners are still around in places like Hershey and Syracuse. You can pick them out because they feel a little more pressure to win. The NHL-owned teams basically are there to produce players for the big club and don't care that much about winning. So they are less likely to have a few quality veterans around who might help get points in the standings as opposed to a marginal prospect.

As for the fights, those have been on the decline for about 10-12 years. The AHL has slightly more per game than the National Hockey League, but most of the goons are out of work these days. It seems hockey players on all professional levels have to play hockey. Note: This may be a good thing, depending on personal preferences.

The story of the current American Hockey League is professionally told by Starkey. He talked to plenty of people in many different cities, and there's little doubt that the picture he paints is an accurate, more-than-full-enough one. Even so, there's something missing here - and it's fun.

Yes, the people involved either like their jobs in pro hockey or love it. But this comes off as a business story for the most part. Some of the points of the book get repeated if phrased in a different way. The one exception to the rule might be the chapter on travel. With the Eastern teams often relying on a bus to get to the next game - in the dead of winter, no less - sometimes things don't go well. They are a lot more fun in hindsight than they were at the time, and the participants almost consider it a badge of honor to have gone through them. It was my favorite part of the book.

"Chasing the Dream," then, is on the dry side, but it's relatively quick to read and will satisfy those curious about the subject. That probably isn't a huge audience, but I'm not sure if there was a way to increase it given the subject matter.

Be notified of new books on this site via Twitter @WDX2BB.
Posted by Budd Bailey at 8:44 PM