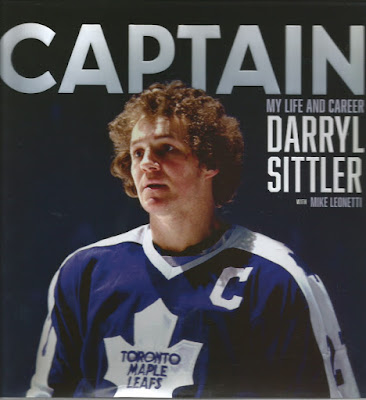 By Darryl Sittler and Mike Leonetti

The Toronto Maple Leafs had plenty of glory in their almost 100-year history, although most of it was in the first half of that time period. There are some championship banners hanging around the Air Canada Centre; they are just a little dusty.

Oddly, though, that tradition usually means that some iconic figures have put on the team's sweater. The Maple Leafs have fallen a little short in that area, at least when compared to their neighbor up the street in Montreal. Frank Mahovlich was dealt in the prime of his career. Fan favorite Wendel Clark's departure caused tears, although the person who came in return - Mats Sundin - turned into the rare great player who stayed almost until the end.

Toronto is such a hockey loving town, though, that their top players do get celebrated - and deservedly so. Darryl Sittler was one of those players. Here he gets the coffee table book version of his life, "Captain."

This is sort of like sitting down with Sittler as he looks over his personal scrapbook. He started the book out with memories of 1976, when he scored 10 points in a single game - an NHL record - and scored the game-winning goal in the Canada Cup finale. From there, it is more or less a review of his hockey life. Sittler played junior hockey in London, Ontario, was on some good teams in Toronto, and moved into retirement. In the last several years, he's enjoyed the honors he has received from his old team and supporters, who might not have realized in some cases that Hall of Famers don't come around for your team every day.

The format for much of the book is pretty simple. Sittler presents his thoughts about a particular subject or person on one page, and there is a photograph or photographs on the adjoining page. As you can imagine, the pages go by pretty quickly this way. The NHL star did donate some of his own photos for the project, which is a nice touch.

Sittler comes off generally well in this book, as he generally had good things to say about almost everyone he encountered in hockey and elsewhere.  There are a couple of exceptions in a couple of his general manager during his time in hockey, Punch Imlach and Bob Clarke. By the sounds of it, you'd have to say he's got a case to be a bit upset.

Sittler already has written a couple of books about his hockey career, so this is something of a supplement or a quick refresher course on his career. You'd probably have to be a big fan of Sittler's to want this book too. On the other hand, Sittler's many fans should enjoy this quick look back at a Hall of Fame career.

Be notified of new posts on this site via Twitter @WDX2BB.
Posted by Budd Bailey at 3:07 PM