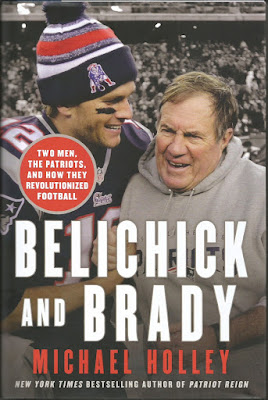 It seems that as long as the New England Patriots keep winning, Michael Holley will keep writing books about them.

My guess, offered from a resident from another AFC East city which has seen the Patriots come to town and beat up on the locals, is that he'll have at least one more book to write until Bill Belichick and/or Tom Brady retire.

In the meantime, we have "Belichick and Brady" to read. It's Holley's third book with a strong connection to the Patriots over the last several years. He even calls it a trilogy in the acknowledgments.

For those who haven't been paying attention over the last decade and a half or so, Belichick and Brady have been the two irreplaceable parts of the Patriots' impressive run of success over the years. Belichick was a top assistant coach before moving to Cleveland, where he only lasted a few years. Some good assistants never made the transition to head coach, but New England gave him one more chance to succeed - even paying the Jets off in draft choices for the chance to hire him. You'd have to say it worked out pretty well for the franchise. Belichick comes across here as someone who makes sure that his players are always well prepared, and that that also are always a little uncomfortable with their job status.

And part of the reason why the team has done so well is that Belichick took a chance on a quarterback from Michigan in the sixth round of the 2000 NFL draft. Brady worked out pretty well. The receivers, running backs and linemen have come and gone over the years, but the offense has kept clicking and the wins have kept coming. Brady has been the constant, and he's certainly in the argument as the greatest quarterback in history. Come to think of it, he might be winning it, depending on how you count.

The easy guess is that this is a book that centers on the two men in the title, and they certainly are key figures. But it's more of a history of the team during the past 16 years or so. Holley certainly put an effort into it. He's mined a variety of sources for information. That includes some interviews with retired players, who can provide some insight into what the two title characters are like behind the scenes. Newspaper, magazine and broadcast interviews are also mentioned.

But does this work in book form? That's a tough question to answer. It's a relatively easy read considering it checks in at almost 400 pages. But there are an awful lot of games and events covered here, which are difficult to make interesting from a perspective of years later. A little closer editing might have been helpful. In addition, if you are confused by Brady's court case and suspension involving deflated footballs, well, this won't help much. Holley seems to lean toward Brady's side of the story a bit.

"Belichick and Brady" probably will work well for those in New England who cheered through all of the big wins during this memorable era. That's fine. The rest of the audience might not be so enthusiastic.

Be notified of new posts on this site via Twitter @WDX2BB.
Posted by Budd Bailey at 12:04 AM