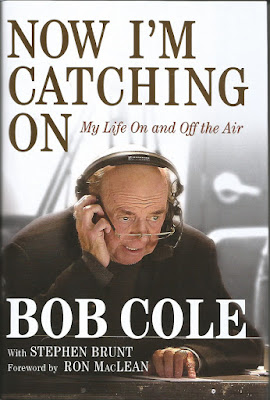 By Bob Cole with Stephen Brunt

Name-dropping time, at least for my Canadian friends.

I actually worked a couple of games with Bob Cole - as a statistician.

I helped out the NHL's public relations department at the Eastern Conference Finals between Montreal and Philadelphia in Philadelphia in 1989. In that role, I supplied information to Bob and Scotty Bowman, the commentator for those games.

Two of the things I remember about those games is that, one, Bob Cole was a very nice man who did his job well. It was fun to sit next to him as he worked, eliminating the television set as the middle man. Then there's, two, the fact that he's the last man I ever saw use a cigarette holder. It's funny what sticks to your memory.

Naturally, I've had another relationship with Bob over the years that's much more common - listener and fan. He's done a lot of hockey over the years, and I've gotten to see some of it from my perch on the border. So it was with some interest that I read his autobiography, "Now I'm Catching On."

It's a little difficult to draw a comparison between Cole and a United States sports announcer. Hockey has such a valued place in Canada's culture, and Cole has done a ton of big games over the years. Maybe Al Michaels would be a good dance partner, since he's been a national voice for our fun and games for many years on this side of the border.

Perhaps the most surprising part of this book is that it takes Cole quite a while to get into the tales of the hockey broadcasting business - almost 100 pages in a book that checks in at 244 pages of text. There are stories about growing up in Newfoundland (he never left), stories about flying, stories about entering the salmon business and curling and dogs, and so on. It's good to get to know more about the subject of the book, although it will be easy for some people to think, "OK, get to the full stuff already."

Luckily, the stories do come. Cole did the Summit Series of 1972 on radio, a couple of Olympics, and plenty of other big games. He tells about how Joe Sakic used to rub his cap for luck before each game of the 2002 Olympics, and Sakic ended up as the star of the Games as Canada finally won the gold medal. There are tales about Wayne Gretzky, thoughtful and polite behind the scenes even when no one is looking. Harold Ballard, the late Leafs' owner who could be a little, um, eccentric, comes off well. Admittedly, Cole's job description did not include making enemies, so he saw the best in people. But even so, there are no axes to grind here.

Sportscasting at that level isn't easy, particularly in terms of raising a family. That's particularly true for someone who lived full-time a few hours by plane of significant events. But he seems to have made it work, in part because he loved the business so much. Cole writes about how much of it a thrill it is to have an office at a hockey rink, and a game still gets him excited to this day - 50 years later.

Fans of Cole certainly will enjoy "Now I'm Catching On." It's not profound or heavy reading, but merely a pleasant read about a pleasant man.

Be notified of new posts on this site via Twitter @WDX2BB.
Posted by Budd Bailey at 6:27 PM