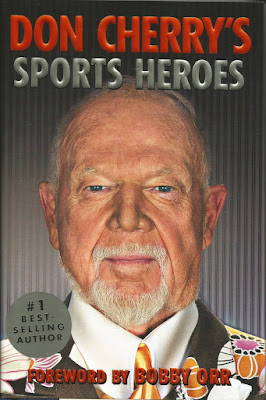 It doesn't take much time to figure out who is the star of this book.

One look at the cover ought to do it.

Yes, Don Cherry, he of uncensored commentary and sartorial splendor, is back with "Don Cherry's Sports Heroes." Just for the record, Cherry's name on the side of the book is much bigger than "Sports Heroes."

This is called good marketing strategy.

Cherry, for those outside of the Canadian market (and border states), remains one of the most popular personalities north of the border. He last coached in the NHL in 1980, and has put together quite a second career since then.

Cherry might be best known for his television work, but he's also become a rather prolific author as these things go. He's put out several books over the years. And just when you think he might be almost out of material, Don is back with this effort ... which requires a little explanation.

About 25 years ago, Cherry hosted an interview show in Hamilton, Ontario. Cherry interviewed a variety of people on the program at some length. That's rather common now, but in those days some sports personalities were quite nervous at the idea of speaking before a live television camera and a studio audience. As you might expect, most of the guests had a connection to hockey, although Cherry did talk to a few other people in sports. The chapter headings include Wayne Gretzky, Bobby Orr, Gordie Howe, Maurice Richard, Ken Dryden and Danny Gallivan. Oh, Joe Frazier and George Plimpton also made the list, although Plimpton sticks to the time he joined the Bruins in preseason while Cherry was coaching.

Now, Cherry has gone to the video tape to go over some of those shows, and had his impressions and memories placed on paper. My first thought was that this would be mostly transcripts of memorable shows. There is some of that, but not too much. The snippets of conversations often serve as launching points for Cherry to go into a monologue, and not necessarily about the show or the guest. That sort of conversation is what the people want out of him, and he certainly delivers that here.

Now there are a couple of points to be made here. One, this book goes by mighty quickly. It's about 250 pages, but can be read in a day or so. This may be a plus or minus, depending on personal preference and whether that's enough reading for $30 (Can.). Two, this is a book about personalities from at least quarter-century ago. Young readers may have heard of Bobby Baun, Red Storey and Paul Henderson at some point, but it's going to be tough to lure them in at this point in the conversation.

Still, Cherry has never lost his ability to entertain, a skill that dates back at least to his time as a coach in the NHL - when his postgame news conferences were anticipated by reporers like comedy shows. "Don Cherry's Sports Heroes" ought to find a good-sized audience of people who enjoy Cherry's winning formula.

Be notified of new posts on this site via Twitter @WDX2BB.
Posted by Budd Bailey at 12:10 AM