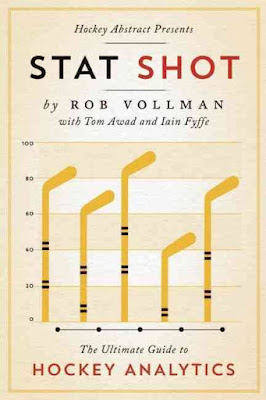 By Rob Vollman with Tom Awad and Iain Fyffe

Someone I know once wondered how easy it would be to create new numerical ways to look at the sport of hockey, because the game was played a lot like jazz - improvised as it went on.

But a lot of people, a lot of smart people to be more specific, are trying to prove that people wrong.

Rob Vollman has been at it for several years, and he's produced books in one form or another for the past three or so. Here's his latest offering for the fall, "Stat Shot."

Basically, Vollman and a couple of friends in Tom Awad and Iain Fyffe go through some big themes, step by step, in these pages. The subjects include building a team under the current cap restrictions, judging goalies by save percentage and other metrics, faceoff success, junior hockey statistics' validity, shooting, and figuring what trades are the most one-sided in relatively recent league history.

Vollman jumps in quite early and points out that the information covered in these pages is at least a year old. The problems of trying to say something significant between the time that the Stanley Cup playoffs end and the start of the season would cause any publisher to cringe. I believe it. So at least here, some of the studies aren't completely up-to-date - but then again, the points that are made still seem relevant. Luckily, the group of statisticians does have a e-book out with more relevant information. I would guess that the e-book would find a larger audience than this, which is a bit more theoretical in nature.

Vollman and Co. certainly take their time in presenting information, and they make a good case for some of their arguments. The question that comes up from non-analytical types is - will I be able to understand it? That varies to a degree on the reader's openness to accept the information, and to put up with some new concepts and anagrams. From my viewpoint, I did have my eyes glaze over a few times, particularly in the description of shooting.

Personally, I think I'd rather read the updated version. This comes across as something that would be good in a special blog for a narrow group of people that wants the information. But the authors at least are doing some good work here, and NHL teams are noticing. Most front offices have a department doing such research.

My reaction to "Stat Shot" was rather lukewarm, because I don't follow the sport closely any more. (Is there anyone thinking about indoor lacrosse for this stuff?) But if you see it in a bookstore, and pick it up,  you might find yourself entertained and informed.

Be notified of new posts on this site via Twitter @WDX2BB.
Posted by Budd Bailey at 11:27 PM