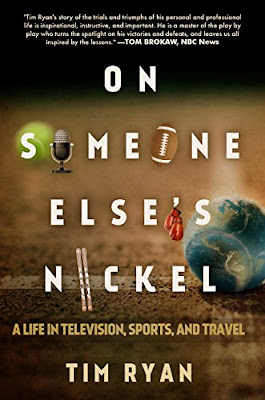 During Tim Ryan's long career as a sportscaster, he always showed up well prepared, never grabbed the spotlight, and did a solid job. You knew what you were going to see when he appeared on television.

In other words, he was a professional.

You wouldn't expect a book by Ryan to be anything different. Sure enough, his autobiography is told in a readable, straight-forward manner. It's interesting to go through "On Someone Else's Nickel" just to see how the life of this sometimes ever-present announcer allowed him to turn up at so many types of events - from the first Ali-Frazier bout to the Olympics.

Ryan might not have had much choice about entering the sports business. He was born into it, as his father was a sports executive in Canada. The Ryans bounced around Canada as a youth, and Tim eventually went to Notre Dame and then was lucky enough to land a job in Toronto when a new television station signed on the air.

After about a half-dozen years there, Ryan noticed that the National Hockey League planned to expand in 1967 and applied for some jobs as a play-by-play announcer. The author says that his Canadian background probably impressed some executives, although he obviously had some talent. Ryan landed a spot as the voice of the Oakland Seals, and doubled as public relations director. From there it was on to New York City, where he attracted attention from the people at the networks, and it was up, up and away from there.

During the next 40 years ago, Ryan worked for all sorts of networks and covered a variety of sports. That said, he established a good reputation no matter where he popped up on the dial. For whatever reason, Ryan became associated mostly with individual sports such as tennis, boxing and skiing. (There was plenty of work with CBS on NFL games, too.) The veteran even was doing a lot of work with equestrian events around the end of his run, since networks knew he would study hard and be a pro at it. Ryan probably surprised himself with that path in its entirety, but it gave him a career.

That path also allowed him to do some traveling, and Ryan took to that quite easily - especially when someone else was paying the bills. So he literally got to see the world on the tab of sports networks. It's a pretty good gig if you can get away with it, and Ryan worked at several glamorous locations. He also worked several Olympics, summer and winter. What's more, Ryan got to the point financially where he could, for example, afford a second home in Switzerland.

The major dramatic portion of the story comes when wife Lee is diagnosed with Alzheimer's disease when she is around 50 years old. Her mind slowly fades away in the years after that, and the story like all such tales in that area is heart-breaking to read. To his credit, Ryan did plenty of work to increase awareness of Alzheimer's. After Lee's death, Tim remarried and went on with his life.

A couple of points jump out about the telling of this story. It has 73 chapters, although quite a few of them only take a minute or two to read. I suppose it's a little choppy that way, but I can't call it annoying. Meanwhile, the story is littered with references to many "close friends" along the way, a few famous but most not so well known. Ryan seems to remember most of the restaurants he's visited over the years, and what type of wine he had along the way. A little editing could have been useful there. Some of the stories you'd expect in a book like this do entertain, thankfully. He covered some great moments and met interesting sports personalities, and they are always fun to read.

It's tough to call "On Someone Else's Nickel" particularly memorable. But Ryan provides his life story in a pleasant way. Those with an interest in the subjects will find some rewards here.

Be notified of new posts on this site via Twitter @WDX2BB.
Posted by Budd Bailey at 9:25 AM