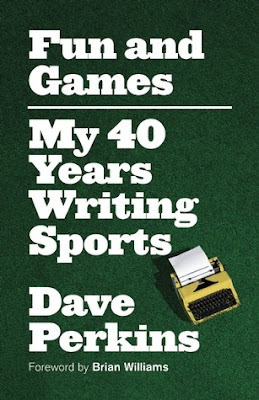 When any self-respecting reporter retires, his initial thought is to write about his experiences. After all, he or she has all sorts of experiences along the way, and they usually are interesting.

Perkins is stepping away from his duties as a reporter and columnist with the Toronto Star, after about 40 years on the business. His look back is appropriately called "Fun and Games," since it's a lot of fun and frequently dealing with games.

Perkins' initial start is pretty typical in this business, demonstrating how much luck can be involved. He already had been told by a faculty advisor that he didn't have the looks or the voice to consider broadcasting - thanks, pal - and that print journalism would be a good outlet for his talents. Perkins had been working on some background information on Watergate when he went down to work part-time at Toronto's Globe and Mail one night. It was part of a two-week tryout the college had arranged for some journalism students. By chance, he knew more about Watergate than anyone in the building, and helped the coverage of that time period in a particular night. Someone was impressed, and he started working his way up the ladder.

From there, it's a case of letting the stories begin. About smoking a Cuban cigar in front of President Bill Clinton. Listening to Jack Nicklaus show total recall about rounds shot decade in the past. Chasing down David Cone in an unusual place in order to get a quote on baseball labor. There are stories about those sports along with everything from harness racing to cricket.

The biggest chapter is saved for the Olympics. Perkins saw a bunch of them over the years, and they have all sorts of thrilling moments as well as logistical nightmares. I particularly liked the story where his newspaper's team of reporters was sitting around watching television - when they realized that no one was covering a Canadian's attempt at a medal. Somehow it had slipped through the cracks. This stuff really does happen, much to the editor's dismay.

This all has a Canadian tint to it, of course, since it's a Toronto writer, but there's not much hockey in here. Yes, there are a few shots taken at Maple Leaf management over the years, which goes into the "shooting fish in a barrel" department of the newsroom. But most of the stories are pretty universal, which means they are enjoyable for anyone who pays attention to sports in general. And there's just enough venom and score-settling along the way to keep it interesting. Some come in the form of quotes from past stories and columns, while other thoughts are quite fresh.

Perkins got to the finish line just about at the right time. The business has changed greatly in the past several years, and it's taking a different - not necessarily better or worse, but certainly different - set of skills to be a journalist these days. "Fun and Games" is something of a look back at a business life that's close to being gone forever, but there's enough fun along the way to keep sports fans who read it entertained.

Be notified of new posts on this site via Twitter @WDX2BB.
Posted by Budd Bailey at 3:43 PM