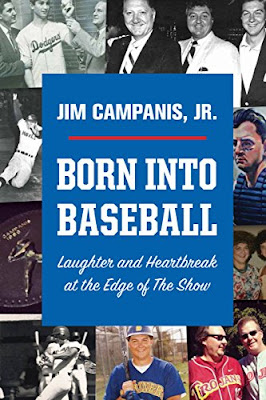 If you are a major baseball fan, the name is a little familiar. Jim Campanis Jr. comes from a veteran baseball family. His father made it to the major leagues for a while, and his grandfather was a veteran executive for the Los Angeles Dodgers.

The youngest Campanis got the baseball gene, but things didn't work out so well. After he played in high school and college (Southern California), Campanis was drafted by the Seattle Mariners. But there are no happy endings in this story, as least for baseball. Campanis never made it to the majors. The closest he came was when he was told before a late-season game that he'd be going up to join the Mariners in September, only to break his wrist on a freak play in that day's game. He never had another chance.

Campanis gave the minors a full shot, but eventually was released for good and figured out he had to get on with the rest of his life. After a period of being admittedly bitter, Campanis started telling stories on his Facebook page about his experiences. He posted bunches and bunches of them, and they were popular with his friends. An editor came along and did some arranging of the stories by theme.

Presto! Campanis had a book, and it's called "Born into Baseball."

The most interesting section of the book might be the first one. Campanis had some unusual opportunities to mix with some of the game's best. He got to work out with some of the Dodgers as a kid, and he was a bat boy for the Angels. There are some unusual encounters with players like Reggie Jackson and Henry Aaron along the way. It's not a perspective that's a common one.

Campanis also reviews an incident involving his grandfather than essentially defined the executive, unfairly or not. Al Campanis went on ABC's "Nightline" one time and made some unfortunate remarks. He said blacks did not have the "necessities" to become a manager or general manager. When given a chance to climb out of the hole, Campanis dug himself a deeper hole. He soon was unemployed. As his grandson points out, this was someone who was Jackie Robinson's roommate in the minors and couldn't have been more supportive of blacks and Latins breaking into the majors. The program always will be associated with the Campanis family, and Jim Jr. heard plenty about it growing up.

From there, Campanis' stories move into the rest of his career. You can probably split them into two categories. It's often fun to read about guys on their way up who didn't look like prospects but beat the odds and made it to the majors, such as Jeff Kent and Trevor Hoffman. Some of the funny things that happened on and off the field also will entertain the reader. But Campanis also comes across as someone who misses the banter among the players and the life of those in the game, and frequently it's tough to be interested in those unknowns along the way.

In terms of writing, this is a tough assignment. Campanis has the habit of capitalizing words at certain times for emphasis. It's a little amateurish. Some of the language isn't for the kids, although the really bad stuff is bleeped out. And with any collection of stories like this, some of the information gets repeated along the way.

It seems like Campanis' stories work better in the original format, one at a time. Still, I think there's an audience for books like "Born into Baseball." Some fans who have posted reviews are very enthusiastic in their descriptions. Who am I to strongly disagree? Campanis seems like he'd be good company over a beer if baseball came up for discussion, and reading this book has those qualities.

Be notified of new posts on this site via Twitter @WDX2BB.
Posted by Budd Bailey at 7:32 PM