Review: The Rise and Fall of Olympic Amateurism (2016) 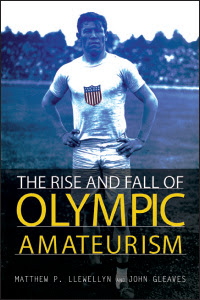 I once read a handy definition of "amateurism" when it came to sports. It was along the lines that amateurism was a way of keeping money out of the hands of those who actually earned it. That's oversimplified a bit, but you get the idea.

The event most closely associated with amateur athletics over the course of relatively recent history is the Olympic Games. Organizers have struggled over the years with coming up with a definition that works for all, until they more or less gave up about 25 years ago and let anyone in the door. You still hear complaints that the purity of the Games was spoiled a bit by that decision, even though there's never been much purity associated with the subject.

Now comes along a book on the amateurism by Matthew P. Llewellyn and John Gleaves, two associate professors of kinesiology at California State University at Fullerton.
"The Rise and Fall of Olympic Amateurism" fills in some gaps in our knowledge of this particular subject nicely if perhaps not neatly.

Speaking of oversimplifications, I've always thought that amateurism essentially started a way for organizers of sport to keep the lower classes out of their fun and games. The idea mostly was associated with Great Britain. The theory was that only rich people could afford to take up a game and practice it enough to become really good at it without compensation. Lower classes had to eat and didn't have the time to devote to pastimes.

There is some truth to that. However, the authors point out that some sports, such as soccer, had a professional aspect to them dating back to the 19th century. That's in part why soccer's big event is the World Cup and not the Olympics, although the story took some twists along the way.

Pierre de Coubertin usually gets the credit for playing the lead role in bringing the Olympics back as a world festival in 1896. It had been a Greek competition a couple of thousand years before that. De Coubertin was something of a romantic and probably didn't have his history straight, but the Games did get going. The problem when it came to amateurism is that standards were all over the place. For example, Jim Thorpe was ordered to give back his medals from the 1912 Games because he had taken a few dollars to play baseball before those Games, which was perfectly legal in some cases. The action was taken so quickly that Thorpe wasn't allowed a hearing. (Note: he was put back in the record book about 70 years later.)

But if there's a central figure to the story presented by the authors, it's Avery Brundage. The head of the International Olympic Committee was a strong believer in the concept of amateurism, to the point where athletes couldn't serve as coaches or commentators on their sports even after they had competed. As the Games grew in popularity, Brundage kept one foot in the past.

However, he was smart enough to change his views on some of the eligibility rules as world conditions changed. When the Soviet Union and its associated nations decided to make a huge effort to become athletic powers, suddenly Brundage forgot about rules designed to prevent government sponsorship and support of the athletes. And when television and endorsements became part of the situation and money was starting to get serious, well, it was fine for the IOC to take it in - but not the athletes themselves. You might call someone who acts that way a hypocrite, and you'd be right.

Once Brundage left the IOC in 1972, the Olympics fell into deep problems for a while. Eligibility issues were on people's mind, but boycotts, doping scandals and concerns on how to split up a growing financial pie among organizers caused problems. But the 1984 Los Angeles Games revitalized the competition in almost all ways, and in 1988 pro tennis players took part in the Games in Seoul. In 1992, the Dream Team showed up in Barcelona for basketball, essentially knocking the barriers down.

Llewellyn and Gleaves are obviously smart people, and they've done their homework. The University of Illinois, which published this book, is the home of Brundage's archives, and certainly the two authors spent lots of time there and well as going back through all sorts of other records and transcripts. They come to some sharp conclusions that appear to be right on target.

However, this is not a book for the beach. The story is mostly told from an administrative viewpoint, and it's a little too easy to get lost along the way. Meanwhile, Llewellyn and Gleaves use plenty of words that may add to your vocabulary; even my Kindle didn't have the definitions of some of them.

"The Rise and Fall of Olympic Amateurism" is an interesting story that fills in several gaps in the subject, and it's not entirely fair to judge a book designed more for an academic audience than for the general public. But it's easy to come away wishing that it was a little more down-to-earth in its storytelling. If you are willing to get through the dry spots and have an interest in the subject, then take a look and give it an extra star. Otherwise, some may not find it worth the effort.

Be notified of new posts on this site via Twitter @WDX2BB.
Posted by Budd Bailey at 11:32 PM

Labels: Review: The Rise and Fall of Olympic Amateurism (2016)