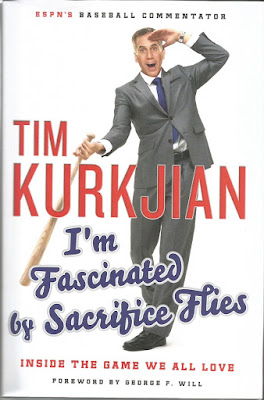 It doesn't take long to know what you're going to read when you look at the cover of this book. "I'm Fascinated by Sacrifice Flies" tells you right away that the author is a man who loves, loves, loves baseball and all its quirks.

Then Tim Kurkjian goes about proving it over the 232 pages in the book.

It's baseball book No. 2 for Kurkjian, the fine baseball reporter for ESPN. The first was "Is This a Great Game, or What?" That was an easy read with stories and facts about the game.

Now he's back, about nine years later, with a repeat performance. Kurkjian goes through the notebooks once again in search of stories and information.

The title of the book comes from a remark Kurkjian made in 2007 on "Baseball Tonight" on ESPN. Carlos Lee had his 13th sacrifice fly of the season. That broke the club record, and it looked as if Lee was headed to break the major league record of 19 set by Gil Hodges. That's a launching point for a series of facts about this narrow part of baseball history. Chili Davis once drove in 112 runs in 1993 without a sacrifice fly, while 10 players have hit three of them in a game. By the way, Lee didn't have another sacrifice fly for the rest of the season.

For part of the book, Kurkjian names a subject and devotes the rest of the chapter on stories on that particular area from a series of people. What's it like to get hit by a pitch? What do players think of superstitions? What sounds are made during a game that the players notice? There are a few chapters devoted to some statistical oddities of the sport, and even one on the fascination of box scores. If you haven't figured out that this book is designed for BIG baseball fans, you probably are on the wrong website.

Kurkjian's best work in the book comes at unexpected times. The first chapter is about how difficult the game is to play. Anyone who has been cut from a Little League team or gave up the sport in frustration knows something about that, but it's tough for the big leaguers too. Then there's a tribute to baseball personalities like Earl Weaver, Tony Gwynn and Don Zimmer who are no longer with us. It's a nice contrast to the three paragraphs and out approach of much of the rest of the book, and Kurkjian's feelings come across nicely.

One more key point - this might be the first review in this space to criticize the foreword. George Will is the author in question, and his approach is to quote several of the items contained in the book. This has the effect of making the reader ask the question, "Haven't I read that already?" when it comes up in the actual text. At least Will read the book, but it's an annoying technique.

"I'm Fascinated by Sacrifice Flies" comes off as a bit unfocused, but there's enough good information there to keep the reader going through it at a brisk pace. Kurkjian's good nature and his admissions about how he's a true "baseball nerd" help as well. His latest book might not be a keeper forever, but it will leave fans entertained.

Be notified of new posts on this site on Twitter @WDX2BB.
Posted by Budd Bailey at 1:25 PM