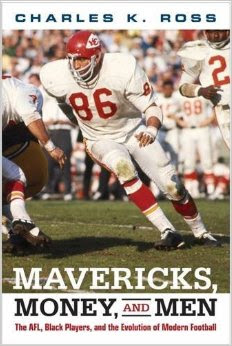 It was difficult not to think of a story a friend of mine once told me while reading "Mavericks, Money and Men." I'll tell the story in a moment, but a description of the book needs to be told to set up the story.

The history of the American Football League has been told many times over the years. A group of men self-nicknamed "The Foolish Club" started a rival league designed to challenge, or at least co-exist, with the established National Football League. Such actions had taken place in the past, but they were rarely too successful. The All-American Football Conference did all right in the post-war 1940s, and a few of its teams merged into the NFL. But in general, the convention wisdom was that the participants in the new league at an ownership level were throwing their money away.

It turned out the AFL did quite well, thank you. There were growing pains, of course, but the league slowly improved and merged with the NFL in 1966. That led to four interleague championship games (Super Bowls I through IV) that took place before the leagues' lineup was reshuffled. The AFL teams famously won two of them, the Jets in 1969 and the Chiefs in 1970.

Author Charles K. Ross spends a great deal of time reviewing the contributions of African American players to the success of the AFL. That's particularly true in the case of historically black colleges, which had been more or less ignored by the NFL through the 1950s. And this is where the story comes up.

I was friends with Larry Felser, the late sportswriter of The Buffalo News. The subject came up about the number of players who came out of Grambling University, coached by the legendary Eddie Robinson, who found success in the AFL. Felser said the reason behind those signings was simple: AFL teams made payments to Robinson in order to make sure that he steered top talent toward the NFL.

I can't say I've ever seen that story reported anywhere. However, Felser covered the AFL throughout its 10 years of existence. He knew everyone in the league, and was on a first-name basis with owners. I have little doubt that if such payments were being made, Felser would have known about it.

Certainly I wouldn't blame Robinson for taking the money if it were offered. The athletic programs of schools like Grambling weren't exactly overfunded, and I'd bet someone like Robinson would do what he could to improve the football program.

I'm not trying to say that the NFL wasn't as good or as quick as it should have been when it came to the area of integration. The Washington Redskins didn't have a black player until the early 1960s. But Ross carries a certain approach into the story that can make the reader stop and wonder whether he's forcing the events of the time to fit into his version of the story.

For example, Buck Buchanan came out of Grambling for the 1963 football drafts. He was the number one pick overall in the AFL selection process, taken by the Kansas City Chiefs. The Green Bay Packers took him in the 19th round. Ross apparently believes that this was due to the NFL having its head in the sand. It's far more likely that Buchanan, for whatever reason, had agreed to an AFL contract already. By the way, since Buchanan - the first black to be taken No. 1 overall - wound up in the Hall of Fame, the NFL should have tried much harder to sign him. Such arrangement were more common than people realize, depending on the year.

Ross also has an unusual opinion on the career of Marlin Briscoe, who is in the history books as the first black quarterback to start a game in the AFL or NFL. He got that job when injuries and a lack of talent wiped out the Denver Broncos at a position. Briscoe moved into the lineup and played 11 games for the rest for the 1968 season. Ross wonders how good the Broncos might have been had they stayed with Briscoe in the years to come, and some believe racism prevented that chance. I'm not discounting that possibility. However, Briscoe's 41.5 percent completion rate as a passer in 1968 and 5-foot-11 height might not have helped his case either. Briscoe certainly deserved a chance to compete for a job in 1969, but the rest of the story shouldn't get much beyond a "what if?"

Otherwise, this is a rather basic story of the history of the AFL. It covers the teams and their seasons, climaxed with stories of championships. There are a few tales that may be relatively new to football readers, showing that Ross did plenty of homework. On the other hand, an early edition of the book designed for reviewers had a few errors, such as the spelling of the name of Broncos' executive Bob Howsam.

Ross' main point about how the contribution of African Americans helped the AFL become successful is a good one. I wish "Mavericks, Money and Men" had concentrated on that part of the story. Extensive interviews with those pioneers would have been interesting. The book that was written isn't quite as compelling, but it will serve as a quick review of a key time in football history.

Be notified of new posts on this site via Twitter @WDX2BB.
Posted by Budd Bailey at 1:47 PM