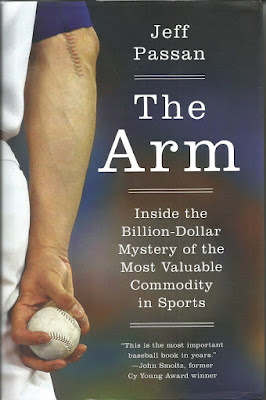 Some of the writers of the Baseball Prospectus series have a pet saying: There's no such thing as a pitching prospect.

Naturally, you could call that shorthand for "There's no such thing as a pitching prospect over the long term, because they keep getting hurt."

It's not your imagination. Every so often, a pitcher comes off the mound complaining of a sore elbow, and in a couple of days the diagnosis comes down with painful finality: Tommy John surgery is necessary. That's an operation that tries to fix a broken ulnar collateral ligament in the elbow.

It takes about a year to recover from the surgery, which is named after the first pitcher to have it. While it might be the most successful development in recent sports medicine techniques, there are still no guarantees. If a pitcher does come all the way back, the ligament can break again. And as we ask pitchers to throw harder and harder, particularly at a young age, more and more of them need the operation. Throwing a ball 100 times every fifth day at 97 miles per hour is going to cause stress to the body. I'm not sure "epidemic" is the right word to describe the situation, but the numbers are on the increase.

People who follow baseball from a distance know this is going on. Still, they have only a vague sense of what's going on and what's involved. That's what makes Jeff Passen's book, "The Arm," valuable. He writes at length (about 350 pages) on the issues involved.

Passen went searching for a pitcher who was willing to be open and honest about the recovery process, and he was lucky enough to find two. Both went through their second Tommy John surgery and rehab during the time frame of the book. One was Todd Coffey, a major league veteran hoping for one last shot. The other was Daniel Hudson, a promising Arizona Diamondback pitcher (see first paragraph) who blew out his elbow, worked hard on rehab for a year, and then blew it out again. The two are both painfully honest about the recovery process and how difficult it is, physically and mentally. Their wives' thoughts along the way add nicely to that part of the story.

There are plenty of other aspects to the story as well. Passen reviews in an early chapter what actually takes place in a Tommy John operation. You can almost hear the drill making a hole in the bone at one point. The author heads to Japan to see how they are handling the rising tide of injuries, in spite of a culture that essentially glorifies the idea of "shut up and pitch" no matter how much pain there is. There are elite programs in the United States that try to identify top players at a young age. A few extra miles per hour can turn into hundreds of thousands of dollars if a pitcher moved up in the amateur draft.

Passan also talks to some people who think they have some answers to curing the epidemic. There is not much proof that they help the situation much, perhaps because of the randomness factor. One pitcher can do everything wrong and still have a long career, while another may do everything right and crumble at age 17. Some medical professors are doing some good work, including one that has created a new type of elbow operation that sounds promising for certain cases. But many admit that we are a long way with coming up with any sort of predictive formulas.

There's also an interesting chapter about Jon Lester, who gave Passen access when he was negotiating with teams as a free agent a little more than a year ago. Lester was an outstanding pitcher who had been healthy throughout his career but had crossed the magic line of 30 years old - and thus statistically was at risk for some sort of decline in the relatively near future. The Cubs bet $155 million before the 2015 season that Lester would continue to pitch well.

There are a few moments along the way here that are a little dense. The human body is a complicated structure, particularly when it throws a baseball hard. I'm not saying a degree in kinesiology (human movement) is necessary to read the book, but those portions aren't a breezy read. Then again, those who pick up a book like this aren't expecting a breezy read.

What "The Arm" does, then, is define the issue and set the table for conversations going forward. That's quite an accomplishment, and it should make it very worthwhile for those who want an extended peak at a situation that figures to get worse before it gets better.

Be notified of new posts on this site via Twitter @WDX2BB.
Posted by Budd Bailey at 12:07 PM