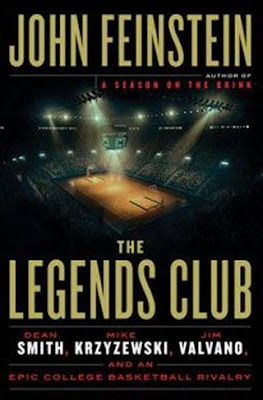 John Feinstein has written a book on three of the legends in the basketball coaching business: Dean Smith, Mike Krzyzewski and Jim Valvano.

After all, Feinstein is one of our most prolific sportswriters in the area of books. He's done plenty of work on college basketball and the ACC over the years. If you are going to write a history of college basketball covering portions of the past 45 years or so, you have to talk about Smith, Krzyzewski and Valvano.

Still, this is a book by John Feinstein, whose work has been excellent for about 30 years. So "The Legends Club" may touch on some familiar ground, it has plenty of charms.

The book is something of a triple biography. Smith was the elder statesman of the group, arriving almost 20 years before the others and becoming one of the great coaches in the business in no time at all. That was in spite of the fact that Smith never won a national championship in his first couple of decades on the job. In fairness, for part of that time he kept running into UCLA teams, and they were hard to beat.

But Smith was the undisputed king of college basketball in the ultra-competitive Atlantic Coast Conference. Yes, some other contenders popped up every so often, but North Carolina was always a contender. Then came along two new faces, hoping to - if not knock Smith off his crown - at least join him on the top of the mountain, looking down on the hoop landscape. Krzyzewski arrived at Duke in 1980 after having some success in Army, not exactly a traditional powerhouse in the sport. Valvano was clearly a rising star in coaching circles in 1980 when he was hired by North Carolina State after making Iona a national power - no easy task.

Game on. Feinstein clearly relishes reliving the 1980s in ACC basketball. Smith was always the standard, and he finally got that elusive first national championship in 1982. But Valvano followed with a title a year later with a run of luck and skill. Then Krzyzewski built his program to a year-in, year-out contender within a few seasons. The three of them loved to compete against the best, and it was a perfect environment for that.

Feinstein shows his usual thoroughness here, adding stories and anecdotes from a variety of personalities. The games between the teams coached by the three men were often classics, and the names involved will bring back memories to avid basketball fans.

The author might do his best work telling the story of Valvano, who reached the pinnacle of his profession and then asked the question, "What's next?" Valvano not only was the funniest man in the coaching business, and maybe the funniest man in any business, but he had plenty of other interests. Valvano took a few too many chances when it came to recruiting, etc., and did a little too much outside work after the title. NCAA violations followed, and Valvano lost his job. He did some television work, and was thinking about returning to coaching when word came that he had cancer, and the prognosis was not at all good.

Valvano fought the disease, but its lead was just too big. As he went downhill, he became close with Krzyzewski - who often would talk to him for long periods of time at the hospital, coach to coach. While that relationship has been mentioned in public, it's interesting to see how it developed. Valvano is still remembered for his speech on ESPN ("Don't give up, don't ever give up), that he gave shortly before his death in 1993.

That left Krzyzewski and Smith as the remaining coaching rivals of the trio, and there are still stories to be told of those years. Then Smith retires and the storyline is essentially over - although Feinstein does cover Duke's progress in the last few chapters.

I believe I've read every one of Feinstein's major nonfiction books since "Season on the Brink," which came out almost 30 years ago. (He can thank me later for helping to put his kids through college.)  "The Legends Club" may have its portions that have been covered elsewhere which will be noticed by compulsive Feinstein readers, but any fan of college basketball will find this quite entertaining and worthwhile.

Be notified of new posts on this site via Twitter @WDX2BB.
Posted by Budd Bailey at 9:41 PM