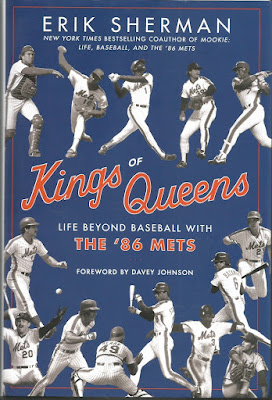 It's 30th anniversary time for one of the most interesting teams in relatively recent baseball history.

The 1986 New York Mets were a dominating squad, clearly one of the best teams of that decade. They won 108 games in the regular season, and went to exciting victories in the National League Championship Series and the World Series. Those Mets had stars, a fine supporting cast, and characters everywhere.

That team is well remembered throughout the country for all of those reasons. I'm not sure if the team was particularly well liked outside the New York City. Brash New Yorkers sometimes aren't appreciated too far past New Jersey. But clearly Erik Sherman liked that team.

The freelance journalist, who wrote a book with Mookie Wilson of that squad a while ago, is back with "Kings of Queens." It's partly a book looking back, and partly a book catching up on some names from the past.

The formula is more or less established at this point. Sherman spent a couple of years tracking down the members of the 1986 Mets in their current locations. Then he picked the most interesting stories and people that he found, and gave them each a chapter. There are 14 such people profiled.

The prototype for this type of book, naturally, is "Boys of Summer." Roger Kahn checked up on the Brooklyn Dodgers years after the fact, and discovered a link to a simpler, more innocent time. The fact that the Dodgers had some interesting personalities didn't hurt either. But this seems more like a book that could be compared to the recent football story, "Monsters," in which Rich Cohen is rather gleeful about the chance to talk to the personalities of the 1985 Chicago Bears.

Here Sherman drops in on the old Mets and turns on the tape recorder. There obviously is editing for space, but certainly the subject can't complain about how they are treated. Are the stories worth reading? That's something of a hit or miss proposition. Keith Hernandez is always an interesting interview, and Bobby Ojeda comes through with some interesting stories too. Ed Hearn, a little known player on that roster, has had all sorts of medical bad luck with his family over the years. It's a pretty dramatic tale.

On the other hand, some players' stories don't work as well. Howard Johnson and Rafael Santana aren't exactly outspoken. Lenny Dykstra remains a little difficult to like at times, and the troubles of Dwight Gooden and Darryl Strawberry have been rather well chronicled elsewhere. It's perhaps worth noting that several of these Mets have turned religious; most of the Strawberry chapter sticks to that theme. That's a little surprising, as Sherman points out, since the Mets had a rather large reputation for blowing off steam.

Sherman's high opinion of that Mets team and its players comes off quite vividly in the questions and comments that come up along the way. Ever think of Gooden and Hernandez as Hall of Famers? Wonder why Gary Carter's uniform number hasn't been retired yet? Sherman has, and he expresses those opinions along the way. That's a little jarring, but certainly it might work with the sensibilities of the book's natural audience.

If there's a common thread in all of the stories, it's that these Mets were something of a puzzle in that they never won that second championship. Most of the players think it's because the squad was blown up within a couple of years of the end of the 1986 World Series. But it was a combustible mix, one that might have been very difficult to hold together for longer than a season.

At least the stars of "Kings of Queens" did have their moment in the sun in 1986. For fans who rooted for that team, it's fun to catch up with some old heroes. It's tough to say, though, if others will find it more than a quick look back.

Be notified of new posts via Twitter @WDX2BB.
Posted by Budd Bailey at 10:57 PM