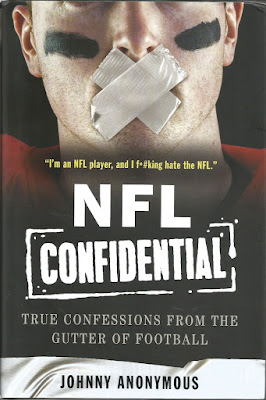 Put a bit of mystery out there, and someone is going to try to figure out the answer - and then spread it all over the Internet.

Such is the case with the author of the book, "NFL Confidential." He writes that he's a current player with an NFL team who kept a diary of his season. Clues: He played for a major college, and was on his second team at the time of the writing.

The diary contains the play-by-play of the season, except all of the names and some of the details have been changed. The last paragraph of his introduction ends this way: "All so you can't figure out who I really am. Go ahead, try. I dare you. Catch me if you can."

I received a copy for review just as the book was coming out. After getting about halfway through the book, I checked on line to see if anyone had some guessed. Sure enough, someone had a pretty good line on the real name of Johnny Anonymous.

No spoilers here. But it's fair to say the points that are raised in the book by Mr. Anonymous are valid and sometimes interesting to the casual fan.

At its heart, the book is the story of a substitute's battles to try to sane in an NFL world that can drive someone crazy pretty easily. Yes, he is making more money than most of us. But he knows that the money can disappear at the whim of an assistant coach, or at the improper bend of a joint. A pretty good life can go away sooner than you'd expect.

Speaking of crazy, one of the stars of the book is the assistant coach of the offensive line, called Lopez. His behavior frequently ranges from odd to damaging, and he clearly doesn't know how to deal with someone like Anonymous who is willing to question authority every so often. There are a lot of coaches out there like that. Remember, if his unit has a bad year for whatever reason, or if his head coach gets fired, he's out the door. Every coach in America has seen a lot of the country for many years, especially in the early going. That will create some insecurity in a hurry: "Honey, we're moving to Tulsa."

There are some interesting insights about the game and life along the way. Ever wonder why a team seems to fall apart right from the opening kickoff? In one case here, Anonymous' opponents came out with a completely new defensive approach that left the offensive line wondering who the heck to block. The result: one, two, three, kick - or worse, in the form of a fumble or interception .Off the field, those meetings between players and fans or owners' friends or sponsors or whomever go over with athletes about as well as you'd expect for the most part.


Without making this sound too much like a book report, there are a couple of themes that run the book. The first is that a certain "jock mentality" is alive and well in our locker rooms, no matter how far society has come along. That turns up in a lot of ways, such as in regard to profanity or attitudes toward women. Anonymous would probably be above that, but he seems to enjoy parts of the atmosphere. In other words, one of the chapter headings is simply the f-word by itself.

Secondly, Anonymous actually shows a little personal growth along the way during the year, which was a little unexpected. He starts in training camp by being thoroughly fed up with the game and its business side, which might not be unexpected after a few years on the fringes. But an odd turn of events allows him to get into action a little bit, and he rediscovered his love of the game in the process. Anonymous also shows some signs of maturity and acceptance in other areas of his existence, which makes him a more sympathic character as he goes along.

The "Johnny Anonymous" gimmick gets in the way a little bit, but "NFL Confidential" is still a reasonably good look what life in the football margins is like. What's more, the author probably will have more to say about the game later in the life ... and maybe he'll get to use his own name that time.

Be notified of new posts on this site via Twitter @WDX2BB.
Posted by Budd Bailey at 4:09 PM