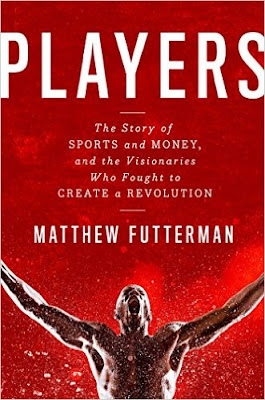 The business of sports certainly has exploded in the past 60 years or so. Our games used to be pastimes, as in baseball's description as "the national pastime." The stakes were low, interest was limited, and mass media attention was basically limited to newspapers and some radio broadcasts.

Now our sports are a multi-billion enterprise, with pictures and accounts circling the globe. The costs of some franchises exceed one billion dollars, and salaries have soared into eight figure territory.

Matthew Futterman has written an account of that change called "Players." It's something of a "one person at a time" account of what the author calls a revolution ... and he's right.

The story starts with Mark McCormack, a Cleveland lawyer who saw a business opportunity with golfers. At that point, golfers were lucky to make the proverbial peanuts, even if they were successful. Golf was just starting to grow at a serious rate, but players still had to do well as professionals just to make a living. McCormack came along and first started working out exhibition matches and endorsements, guaranteed money that could take out some of the risk of playing golf on tour.

One of his early clients was Arnold Palmer, just becoming a superstar. He was a man full of talent and charisma. McCormack became Palmer's agent, and the money started to mushroom. The combination worked so well that Palmer was usually on any list of wealthiest athletes in terms of income (including funds from endorsements) right through his 70s. From there, McCormack was smart enough to branch out into other areas, such as producing television programs.

From there, Futterman goes into other case histories. Jim Hunter was just another great pitcher before he got into a contract dispute withe his boss with the Oakland A's. Hunter was declared a free agent, and became far richer than anyone could have imagined in the 1970s. Once the financial bar was raised, everyone saw what the true market value of top players was - and everyone wanted a piece of that pie.

Other athletes and sports followed like dominoes. Edwin Moses was part of the fight by top amateur athletes to get paid by promoters and associations for his track accomplishments. Stan Smith had the most to lose with tennis players went on strike at Wimbledon for more money and better working conditions. Nick Bollettieri came up with a completely new way to train young athletes, and changed the sport in the process.

Then there are the less-known personalities, such as Frank Vuono, who thought it would be a good idea to sell uniforms of NFL players to the public. No one else thought that way, amazingly in hindsight. Phil Knight of Nike (admittedly, relatively well known as these things go) started with a sneaker design made on a waffle iron, and pushed sports in a different direction. Leo Hindery helped put together the YES Network, which has made the New York Yankees large amounts of money. Their stories are all pretty interesting as they cover different approaches.

There is one key thread that seems to link most of them, particularly in the early days. The powers-that-be fought the revolutionaries every step of the way back then. Those unnamed officials had complete control, and liked it that way. Yet when the business changed and those authorities figures finally took advantage of the opportunities, they and their organizations profited enormously. Seen the cost of an NFL franchise lately? Notice any merchandise with the Wimbledon name on it? Watched all of your favorites' teams on television?

Futterman ends his story with a personal touch, adding that he enjoys watching the U.S. women's soccer team because it has more innocence than the pro teams. He also gives some signs that pro sports' financial might is in a bit of a bubble, and at some point the bubble might burst. Clearly, though, we're not going back to the "good old days" anytime soon.

Sports business books are never going to achieve mass popularity, with the exception being "Moneyball," I suppose. But "Players" is a nice job of putting together the pieces in showing the changed landscape. It's only a portion of the story of the subject, but it's probably the most interesting part. Those seeking an education in the field can benefit from reading it.

Be notified of new posts on this site via Twitter @WDX2BB.
Posted by Budd Bailey at 3:05 PM