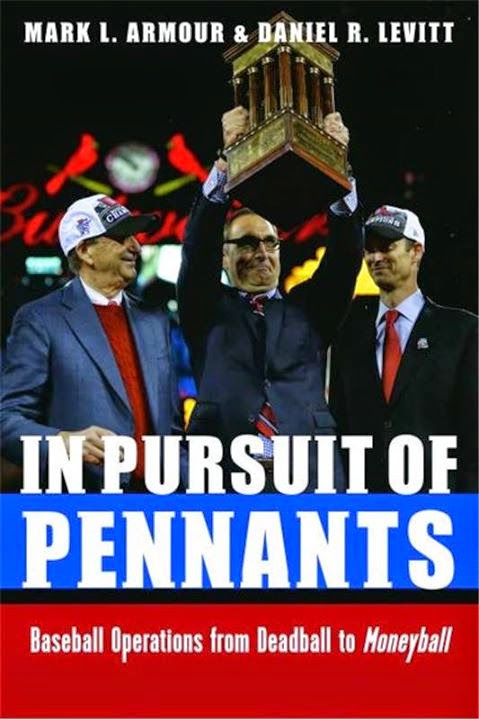 The most fundamental question in major league baseball might be this one: How do you win games?

Obviously, scoring more runs than the opposition on a consistent basis is a good start. But, how is that accomplished?

It's a tougher question than many might think. After all, if it were easy, everyone would be doing it ... and every team would wind up at .500. Not only that, but the rules about putting together a winner in baseball keep changing.

Mark L. Armour and Daniel R. Levitt have taken on the big job of explaining how that task has changed in the past 110 years or so. No wonder the text of "In Pursuit of Pennants" checks in at more than 400 pages.

The short answer is that as the game has become more complicated, and more financially rewarding, the number of people in charge of such decisions has grown almost exponentially. We've gone from one or two people to dozens and dozens over the years as the stakes have gotten bigger.

That was a slow process, of course. This book starts in the 1890s, when baseball was just starting to move past the original concept where the captain was also a recruiter of local talent, and the games really were my town's best against your town's best. Before long, though, owners such as Barney Dreyfuss of Louisville and Pittsburgh started to take a role in putting together the team. That got to be a big job, so managers received a larger role in selecting the roster.

Eventually, the business of the game grew a bit, and the owners needed someone to oversee the ball club. That spot eventually became known as a general manager. Naturally he needed assistants as the organization grew in size.

Every so often, something came along to change the rules when it came to player acquisition. Let's list some of them - minor league teams became part of a major league organization, African-Americans (and later Latins and Asians) entered the talent pool, the amateur draft came long, the league expanded, and free agency arrived. It wasn't always easy to keep up.

The book, then, becomes something of a collection of case studies of certain teams in particular eras. The great Yankee teams and the Big Red Machine are profiled, as you might expected. But there are surprising choices as well. The Kansas City Royals, for example, rarely missed a step when they entered the American League in 1969, and became a constant contender in about seven years.

It's often very interesting to see how teams got better. For example, the Boston Red Sox of the early 1960s were rather awful. General manager Dick O'Connell cleared out many of the veterans, put in some talented youngsters, and watched the win-loss record slowly improve. The surprise 1967 pennant was followed by years and years of winning seasons, and it's great fun (at least for those who are familiar with the team) to see how things were put together in hindsight.

The narrative concludes in the present day, where teams like the San Francisco Giants used the latest analytics and technology advances to seek out an edge on the competition. It seems to be working, based on their record of success lately.

Credit goes to Armour and Levitt for some comprehensive research into the subject. There are plenty of interesting facts presented along the way. Drawbacks are few in number. It can be a little dry in spots, and a little editing would have gotten the manuscript down a bit to a slightly more readable length.

Plus, "In Pursuit of Pennants" obviously is designed with the good-sized baseball fan in mind. In other words, members of the Society of American Baseball Research will thoroughly enjoy this. Others might not open this volume, but it's nice that such a smart work about an important aspect of the sport is there for the reading by those who wish to get an advanced education on the subject.

Be notified of new posts via Twitter @WDX2BB.
Posted by Budd Bailey at 1:20 AM